I was supposed to go to CKC Manchester today. But instead I spent the day getting my alternator replaced. I really wasn't meant to go to this thing. First I got stuck in traffic for like an hour on the Mass Pike. When traffic finally started moving, I realized that they weren't letting people through, they were turning people around and sending them back from whence they came on account of a rolled trailer truck carrying propane or some such. So I was thinking I'd have to find an alternative route. But then my battery light went on. So I called my dad (because I still call my dad when I have car trouble even though I am 32 years old) and we decided I should start driving to Putnam where I get it serviced. Well, at least I made it off the Mass Pike before all my electrically controlled devices shut down - wipers, dashboard gauges, power windows, headlights, radio, all of it. Then the car started bucking and as soon as I got it pulled over it completely died. And I'm not going to lie, I did cry a little when I realized I was broken down in an area where no cell phone service was available. I managed to get a very weak signal by walking a ways down the road - long enough to tell my dad what exit I got off on. So the car was towed to King Olds and the alternator was replaced to the tune of over $500, after towing and labor.

I guess I could go to CKC tomorrow but somehow I don't feel much like shopping for scrapbook supplies anymore.

But still, what a waste of a personal day. Sigh.

Since I was in Putnam, I cooked dinner with Nick. So that was good. We don't get to cook together as much these days. We used to do that all the time. We made a pasta recipe from one of my Naked Chef cookbooks and had some Riesling. And we ate it while watching the best of Insomniac with Dave Attell. Good times.

Do you think THIS is why we're still single? Trying on shoes at Payless involves not only posing ridiculously, but photographing it. 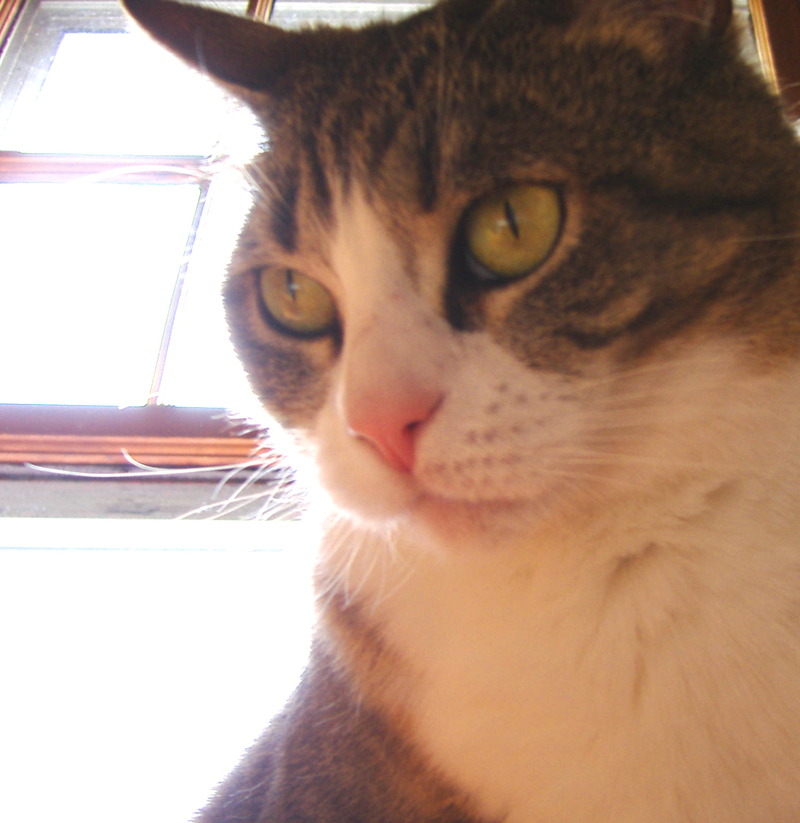 This is the fat one. She actually answers to the fat one on occasion. Like if I come home and say "Hi, the fat one" she comes over and lets me scratch her head. She's very pretty though. I'm happy that I managed to take a photo of her without flash that is not a blurry mess. Fat-face cat-face is another of her names. She likes that. Or Naughty-pants. That one's for when she's, you know, being naughty. Like when she jumps on my kitchen counter, climbs into the sink and sits there licking the faucet. And sometimes she's called fatty-cakes. She's not horribly fat. She's just bigger than Gretchen. Most cats are bigger than Gretchen. That's why Gretchen is called Smally. Smallbert. Sir Gretchibald. Piglet. Chicken.