back from the beach

Beach week is over now and it's so sad. I have one week left of vacation and that's even more sad. I don't feel ready to go back to school. Although, to be honest I don't feel like this summer was relaxing. I don't feel like I had any time at home to get stuff done. I wanted to get a lot done around the house and I didn't.
Anyhow, the beach was great. The house was right on the waterfront - it's the only way to go. We ate a lot and had cocktail hours and even went to the Pavillion a couple times and lounged around on the beach reading magazines and watched Dirty Dancing and on Friday the guys came to visit and we had dinner and played pictionary. Except we wrote our own prompts. And for some reason, there were a lot of Golden Girls references. We love that show. I thought I was being very clever with some of the prompts I wrote, but apparently I was a little unclear on the rules and it ended up backfiring on me because I was the one who had to draw "nobody puts Baby in a corner." Oops. 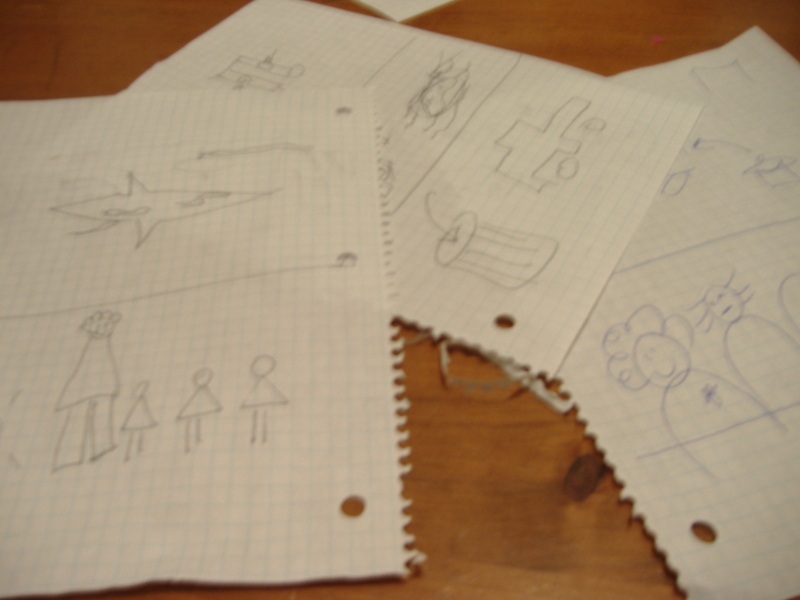 The drawing on the bottom left is the Golden Girls. You can tell because the really tall one is wearing a tunic with slacks, so obviously that's Dorothy Zbornak. Another prompt was "Stan, you're a pig in a cheap suit." Unfortunately Paola and I were on opposite teams and I was drawing for my team so I couldn't guess. She knew it as soon as she saw the pig face. So, we really like The Golden Girls. Here is a T-shirt I gave Paola for a present. 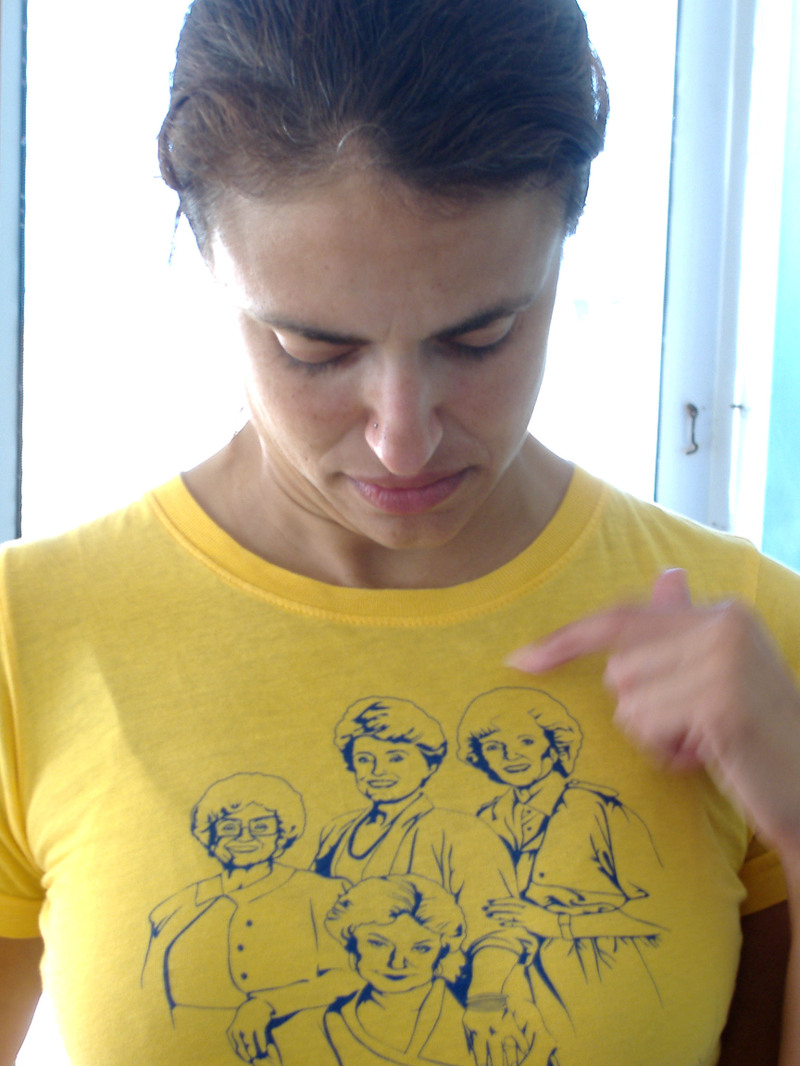 She loves it. You can't see it but under the Golden Girls, it says "Stay Golden." It's the greatest T-shirt ever. I saw it and knew Paola had to have it. She got a T-shirt for me in Italy that says "It's never too late for tasty." It's fantastic. I'll post a picture of it later. She almost got one that said "Have a great day with a hot drink." You gotta love it. She got "it's never too late for tasty" for herself too, so we can be twins. It has a tomato in a chef's hat on it. For Christmas I got her a shirt that says "Chester A. Arthur is totally A. awesome." We might be in a gift-giving rut. Next time I buy her a gift, I won't get a T-shirt, no matter how amused I am by it and no matter how funny I know she will find it. But the Golden Girls shirt kicks ass. Rita, Paola, Kristen and I posed like the T-shirt and took a picture. I was Blanche Devereaux. Both of these pictures are from beach week, but maybe I should post some from outside so you can see the beach. 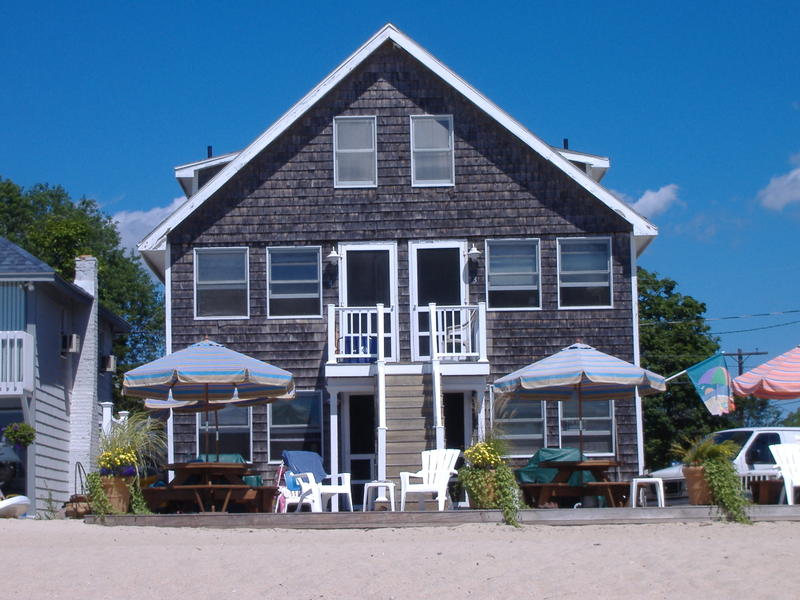 Here's our beach house. We were upstairs on the right. The families in the other units were nice even though they were Yankees fans. 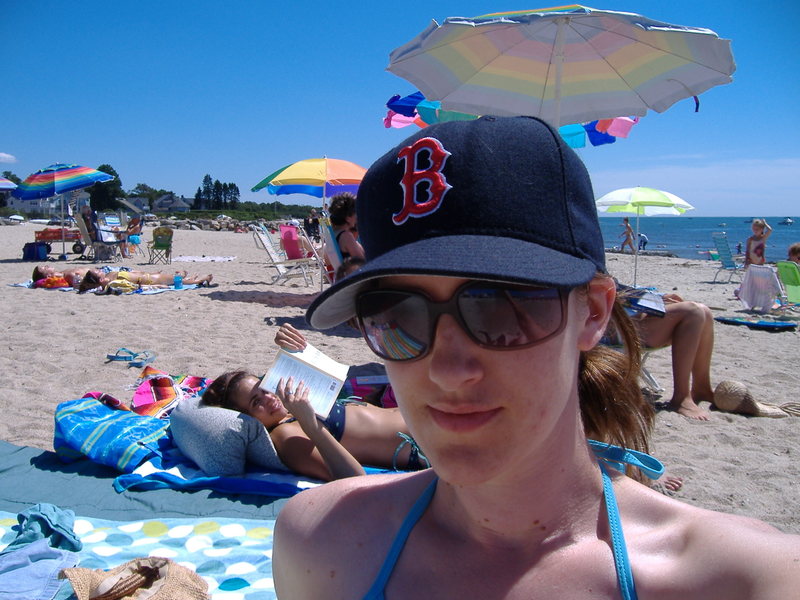 And clearly, I am not. The Sox lost both games of their double header with the Douchebags on Friday. It was upsetting. 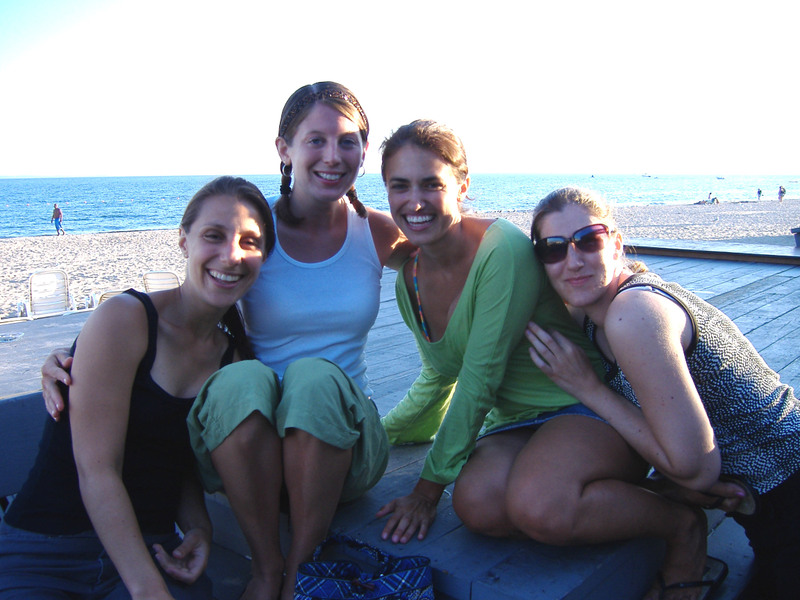 Here's Rita, Meggies, Paola and me at the Pav. We don't usually go, but we did this year. Clothing is optional at the Pavillion and we opted FOR it. 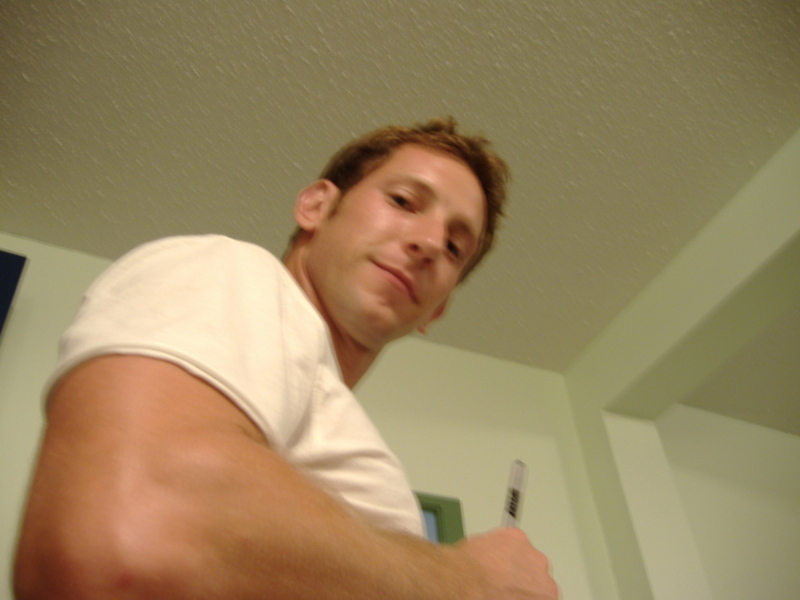 And THIS guy is party central. He was our Pictionary emcee. I hadn't seen Nate in a couple weeks so I'm glad he could make it to the beach. He came on Friday. So did Paola's boyfriend Jon and Rita's boyfriend Nate. We had two Nates. 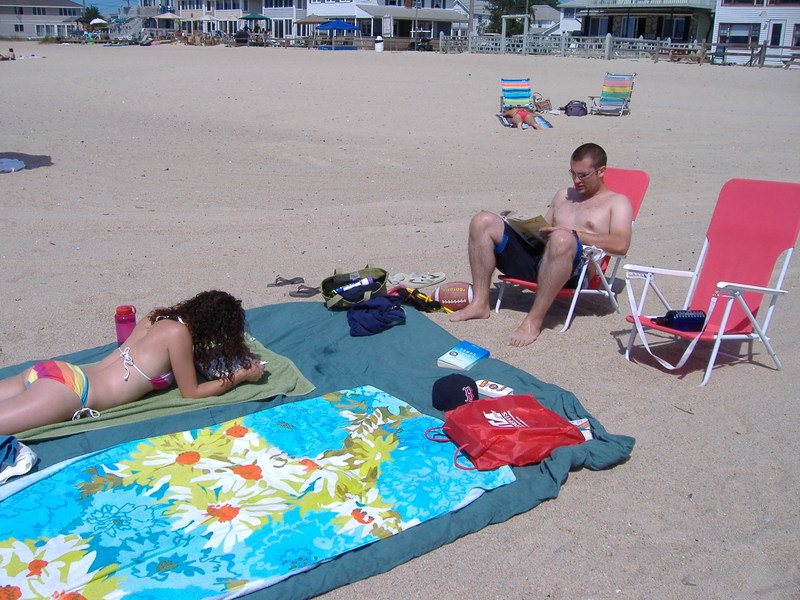 And here's Ryan and Kelley. They visited on Saturday and Sunday, at the beginning of the week. No one else had arrived yet, so it was just me and them. Very nice to have a day on the beach with them.
In summary, I love beach week and can't wait for next year.
Now I need to begin to prepare myself mentally to go back to work. This is gonna be rough. 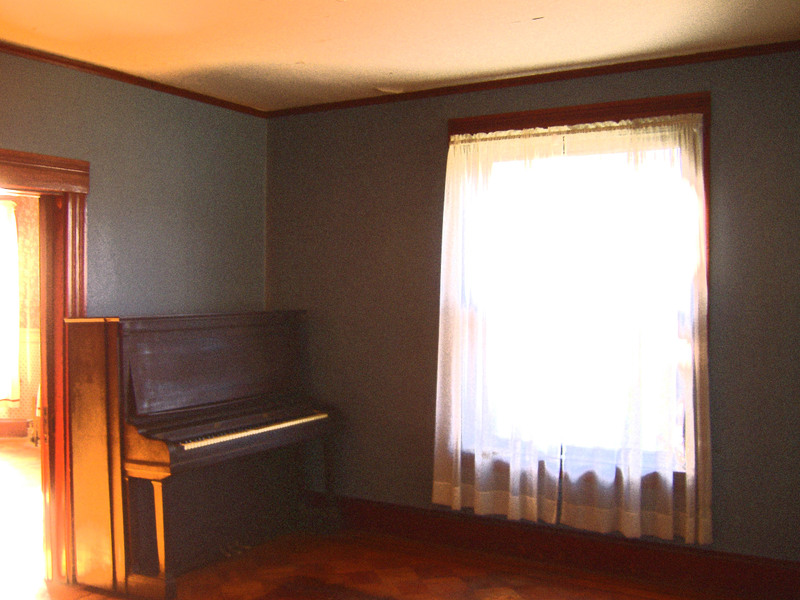 Except for the piano. We left it for the new owners. The closing was today. I went before the walk through and took pictures of my house, empty for the first time in 31 years. And yes, I cried. 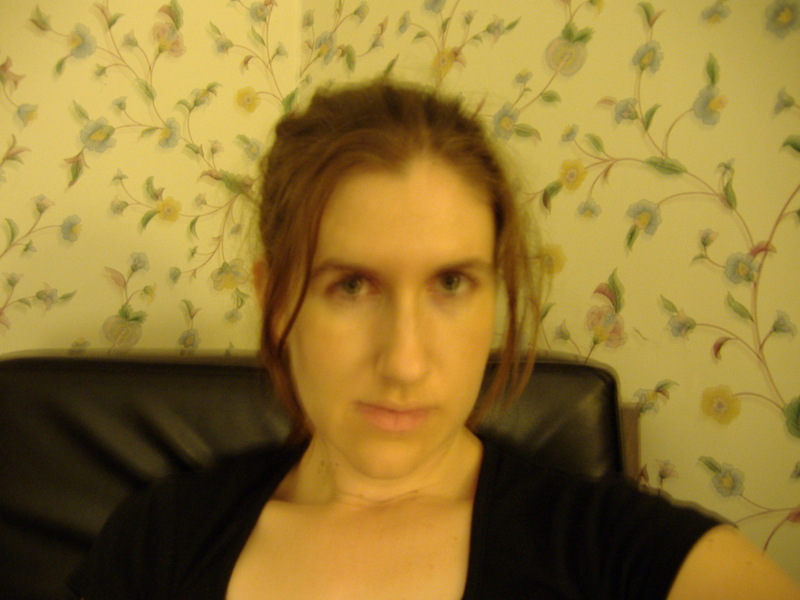 The MTA conference in Williamstown was great. This is me in the hotel on the first night. I feel the need to take pictures in hotels. I've got a real thing for them. The only time I ever tear pages out of fashion magazines is when they have a photo shoot in a hotel or of a road trip. That's your weird Anja fact of the day. So, the conference was awesome. I met cool people and learned useful things. 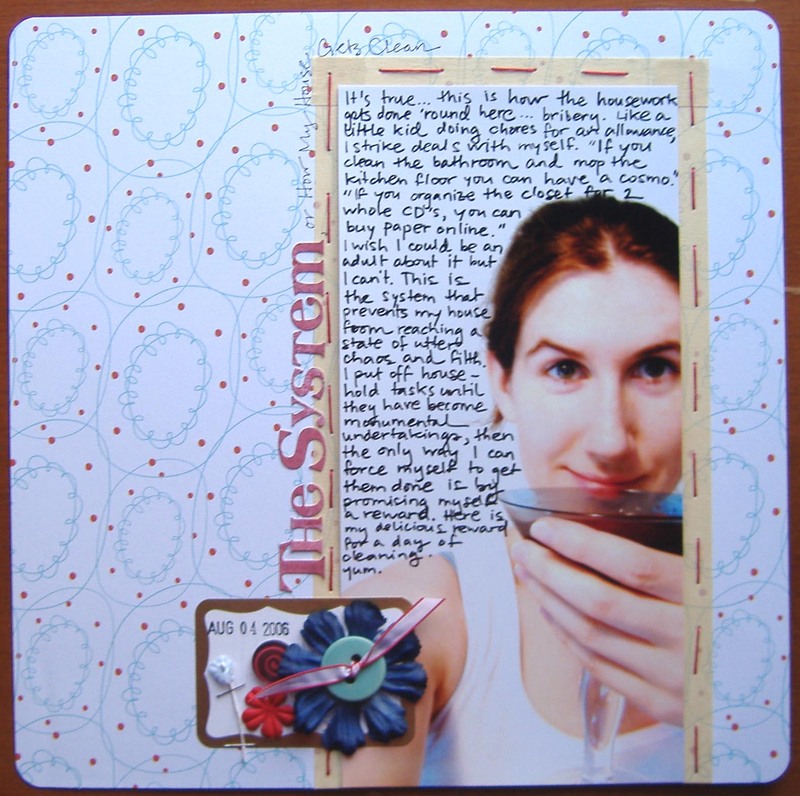 I finished my KI album today but I can't show you that. Instead, here is my LO for the 1st week of Last Scrapper Standing at The Dares. 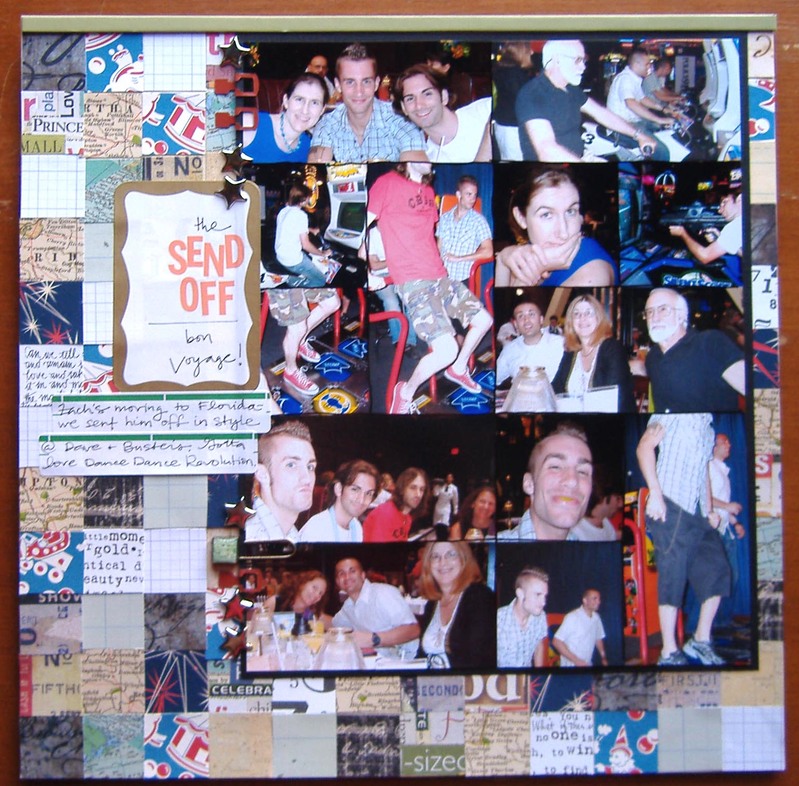 And here's HMITM#9. As it turns out, I think 15 different patterned papers is actually too much for me. I have discovered how much is too much and it is 15. Somehow, other people are able to rock this. But not me. 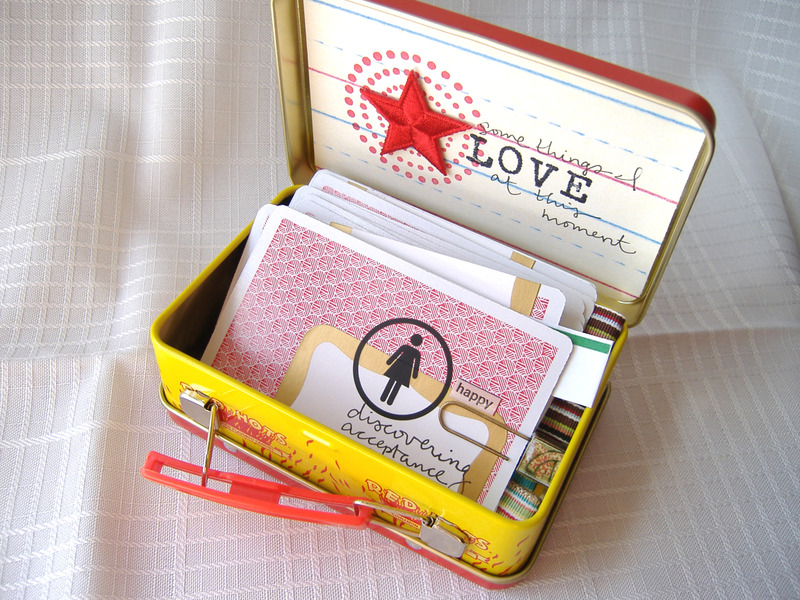 And here's a little peek at my altered project from my Poppy Ink entry. I love this little thing so much. 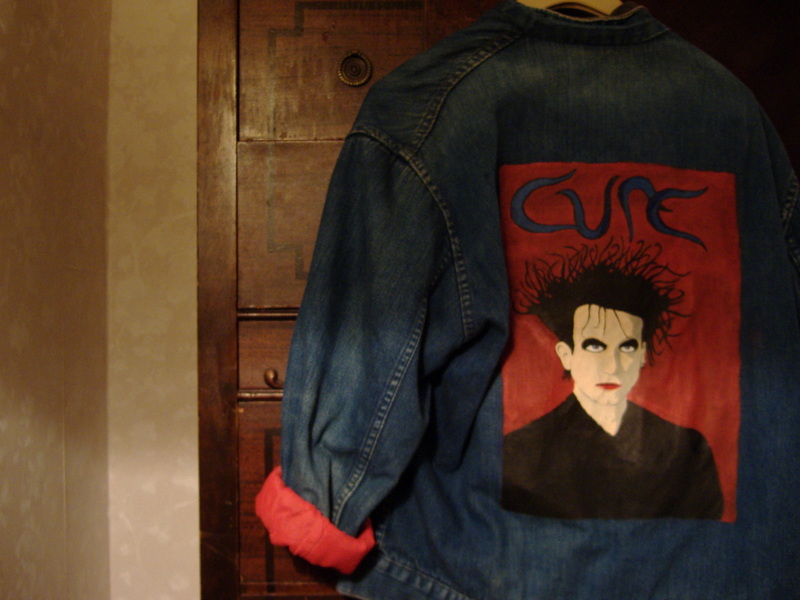 And looky what I found in the back of a closet when we were packing up the house. My friend Jason painted this for me in high school and I loved it and wore it to death. Robert Smith was my high school hero. I feel like it is not OK to get rid of something like this, even though I will never wear it again. Because I am overly-sentimental. Bordering on maudlin, really. You should have seen me this morning. You'd have thought someone died. It's a house. Get a grip.
I'm off to the beach tomorrow. I'll be gone all week. I love beach week but I kind of wish it wasn't consecutive with MTA conference week this year. I only have one day at home in between to take care of all my shiznit. Busy. Rushed.
Summer vacation really is almost over. Ugh.

and I've been killer productive today. I love being productive. It doesn't happen that often. In addition to cleaning my kitchen, bathroom and bedroom, I got the KI album pretty much done - I just have to add the photos. And my Poppy Ink entry is ready to go. I'm submitting tomorrow for that. And I did the first challenge for Last Scrapper Standing at The Dares. And I did my HMITM pages for last week and this week. Whew. It's 4:30 AM. I should go to sleep. I have to go to Putnam tomorrow and help pack up the house. The closing is next Friday. I'm pretty sad about my childhood home no longer being there for me. Here is my house. 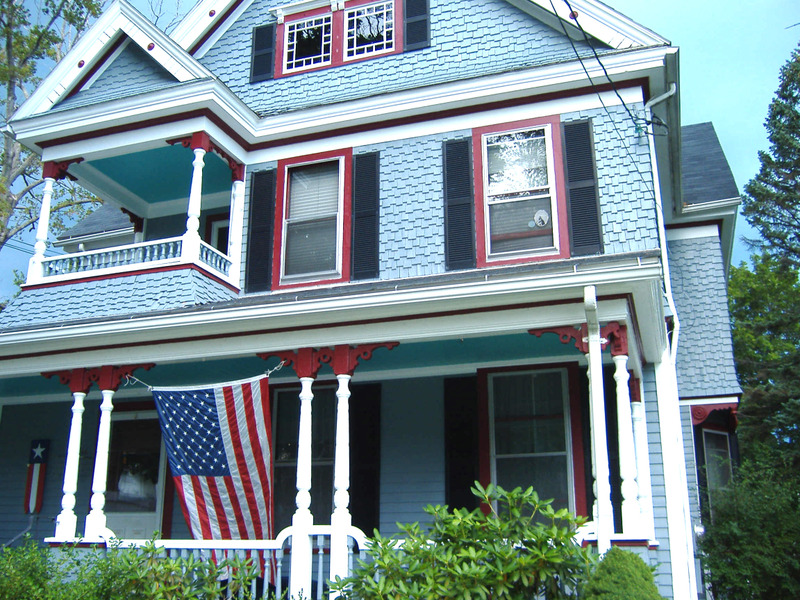 I'm going to continue to call it my house even after the sale is final. It's been my house since I was one year old. I have dibs on it being my house. But tomorrow I have to go help pack. I keep on finding more of my stuff every time I go over there. I'm sure I'll come home tomorrow night with more boxes of stuff. And then my house will be messy again. I know, I know it's time to sell it. My parents put an offer on a new house - it's really nice and they really want it. And this one takes so much work. It's time to move on. I know that. I just hate it.
Here's some stuff I've made recently: 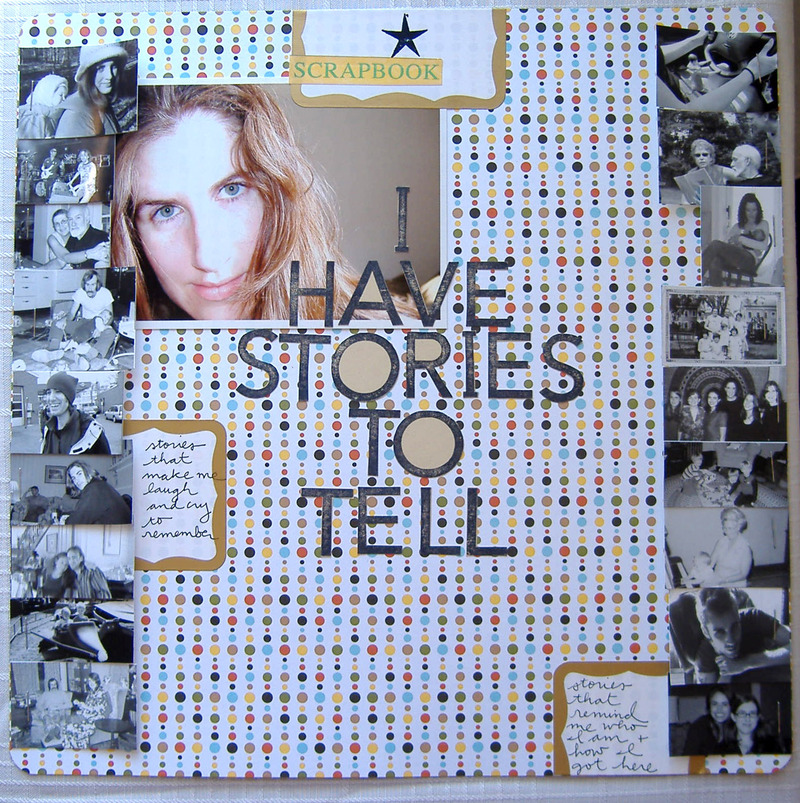 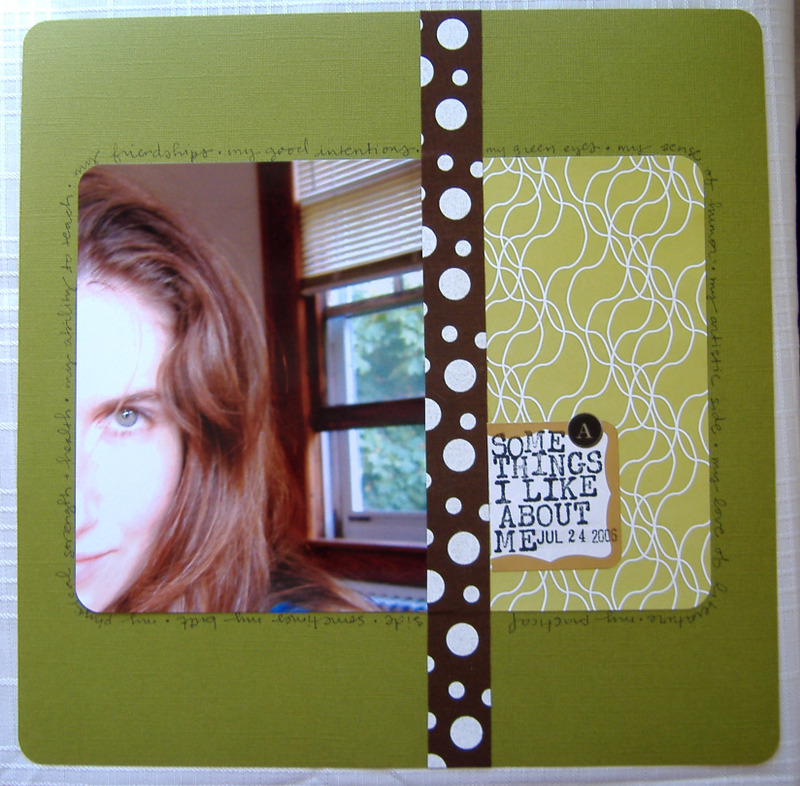 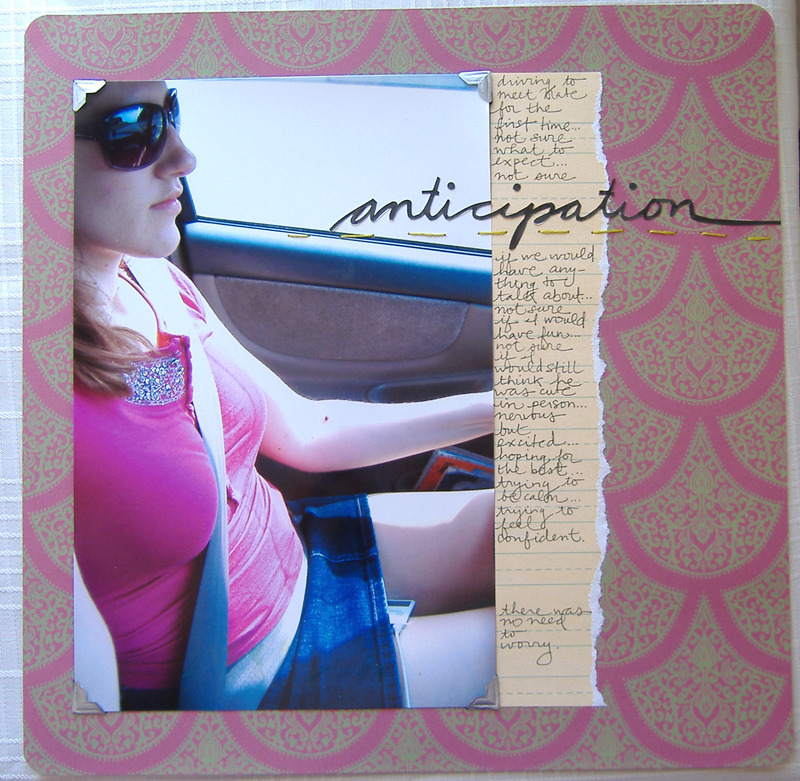 For no particular reason. 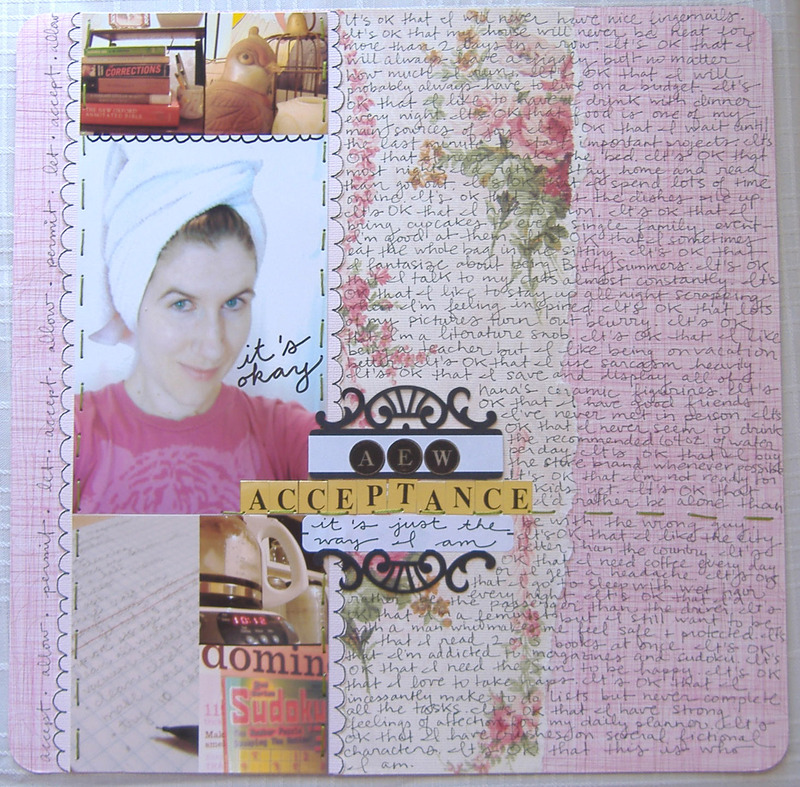 For MMM, which I didn't enter after all. 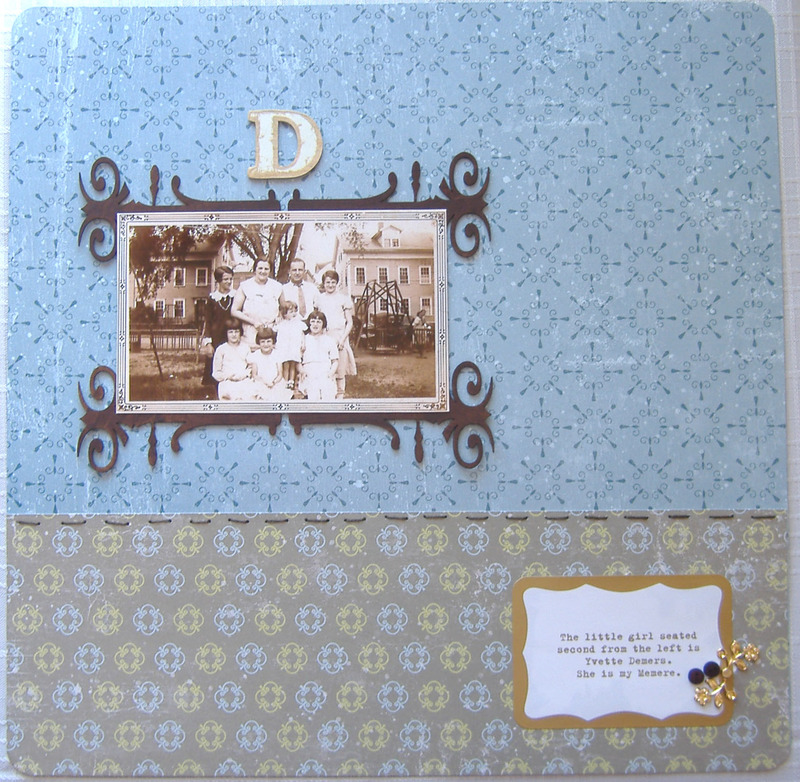 With the July Poppy Ink kit. I can't tell you how excited I am about my altered project for my PI entry. I don't really do altered stuff, but this is too cool! I know, I shouldn't say that about my own project but I love it so much. I'm also in love with my KI album and I wish I could show these things to everybody right now. I really need to go to bed now. Really.