and I'm supposed to list 7 random things about myself. Let's see if I can think of any.

and it is fascinating.


5. I'm a Harry Potter geek. And I can't wait for book 7. But I'm also sad for it to end.
6. I'm a capricorn. My rising sign is virgo. My moon is in libra. My brother could tell you more precisely what that means than I could.
7. It's taking me way longer to think of 7 things than it should. And that is 7. I cheated.

And now I'm supposed to tag 7 other people and they have to list 7 random things about themselves and tag 7 more people and so on.

So I tag...the A's and a herd of rhinos, and a few others...
Alison
Amber
Sarah
Mara
Jamie
Jocelyn
Jocelynne

and there you have it.

the good news and the bad news 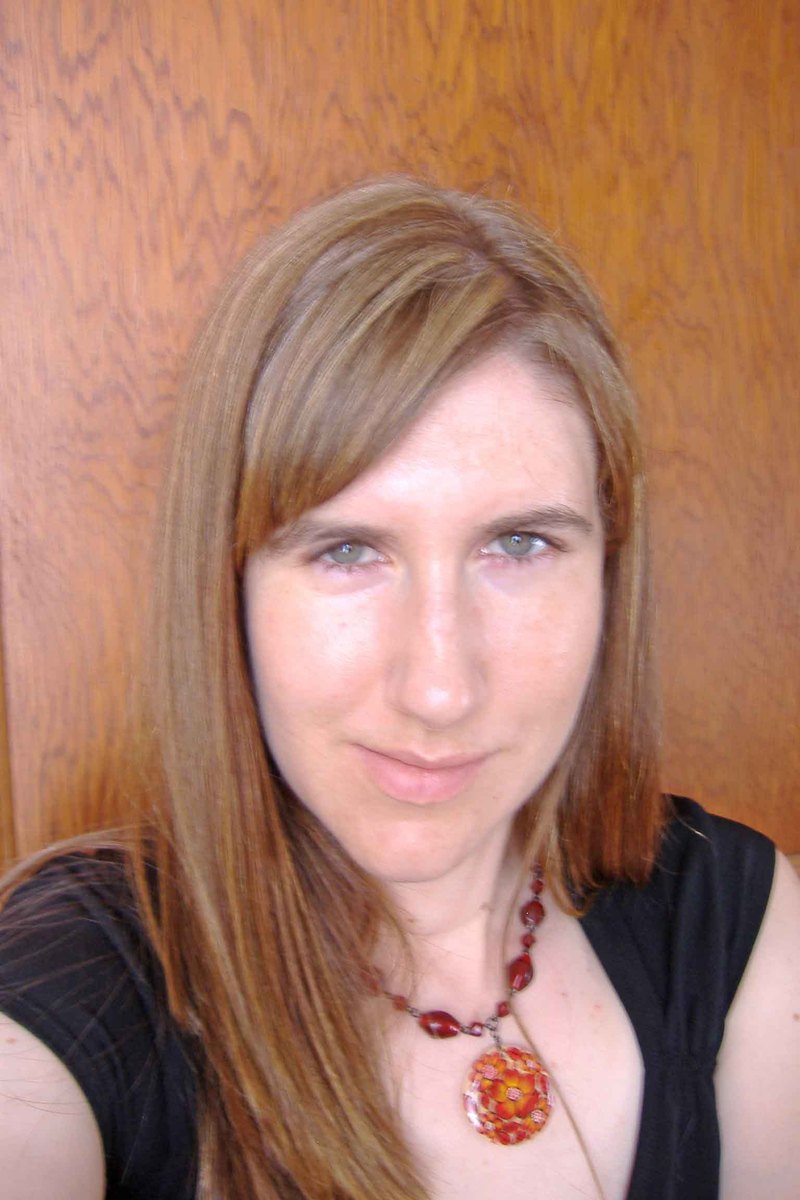 Let's disregard the fact that apparently even my face is bloated right now and focus on the hair color that Heather gave me today. The good news is that I absolutely love it. I actually wanted it a litle bit lighter, because I like to go a little blonde in the summer time. In this picture it looks less blonde than it is. The blonde is subtle. Heather is pretty brilliant when it comes to hair. She also trimmed my bangs a little. The bad news is that there is no way I can afford to maintain this. If I had been sitting in a chair when the girl rang me up I would have fallen out of it. It's been a while since I've had foils, but I think the prices have gone up. Usually I go darker and it's around $75. I was not prepared for $150 today. I didn't even get a hair cut, just a tiny bangs trim. What expenses can I give up so that I can have blonde highlights? I've been bad about shopping lately. The credit card needs a break. The Anthropologie dress really opened the floodgates. I bought 2 more dresses (from Marshall's though, so a lot cheaper than anthro), a visor because obviously I can't run without one, 3 bathing suits (who can pass up a Lilly Pulitzer bikini at a discounted price? and besides my Mom and Dad have a pool now and I need bathing suits - 3 of them), and a heap of new running clothes. Just the other day I was organizing my work-out clothes bureau (yeah an entire bureau just for work-out clothes) and thinking to myself "I really have a ridiculous amount of work-out clothes." But somehow there was a disconnect because I was in the athletic wear section of Marshall's picking up stuff like nobody's business. My rationale is that sometimes having cute new things to wear inspires me to work out. Which is pretty lame. I was doing so much better about the shopping thing. But now I feel like I have fallen off the wagon. That's when you slip back into addiction-type behavior, right?  My theory is that I'm much better at not shopping when I'm on the heavier side. I hate trying on clothes when I feel fat. When I start losing weight I get psyched to wear cute things. So losing weight is good, but buying stuff on credit is bad.

Today was my day off from running. But Alison has inspired me to take another shot at Town Farm Road tomorrow. We'll see if the "see the hill. take the hill." mantra works for me. I'd like to at least get 1/2 way up it before turning around. When I think about it in my head I'm all "I can totally do this" but when I'm actually running up it, not so much. A mile is a long uphill. 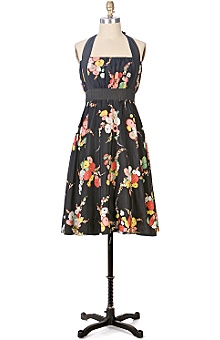 And I totally own it! I bought it this weekend for Johnny Paulhus's wedding in August. I don't think I can wait that long to wear it. It's making me way happier than I should be over an inanimate object. I was trying it on and the girl in the dressing room was like "that's the prettiest thing we have in the store right now!" and I was all "I know!" It was kind of a splurge but I think it is kind of timeless. So as long as my rib cage doesn't get any bigger I should be able to wear it for years. I wish I lived near an anthropologie so I could work at it for the summer and spend all my earnings on discounted clothes!

I've been selected as a DT member for Scrap Gal for July, August, September and October. I'm so excited because I love that store. It's the only online store I really use. They're sooo fast!

And as an initiation, I had to create a LO without flowers, chipboard alphas, brads, sequins, bling, blue, hand-cut titles or stripe/grid/notebook patterned paper.

This is what I came up with... My brother has some interesting new facial hair. It's a little Abe Lincoln-y. He had a full beard with no moustache for a while and that was even more so. I used some stuff I've had lying around for a couple years - the brown frame and the monogram, which I'm sure I initially bought thinking I'd use it for myself. But it works for Aaron too. Many of my big, fancy A's end up on Aaron pages.

It's 11:54 PM and I'm waiting for the new garden to be posted at 2peas. Come to think of it, though, they might not be on eastern time. Dang it all. I have a certain thing I wanted to see. I hope it goes up at midnight eastern time because I can't really stay up much later than that. Tomorrow is the last day of school (woot) and I've got a lot of crap to take care of in my classroom and all the requisite sign-out paperwork to deal with. Then the teacher-party. Sweet vacation, I love you so much. 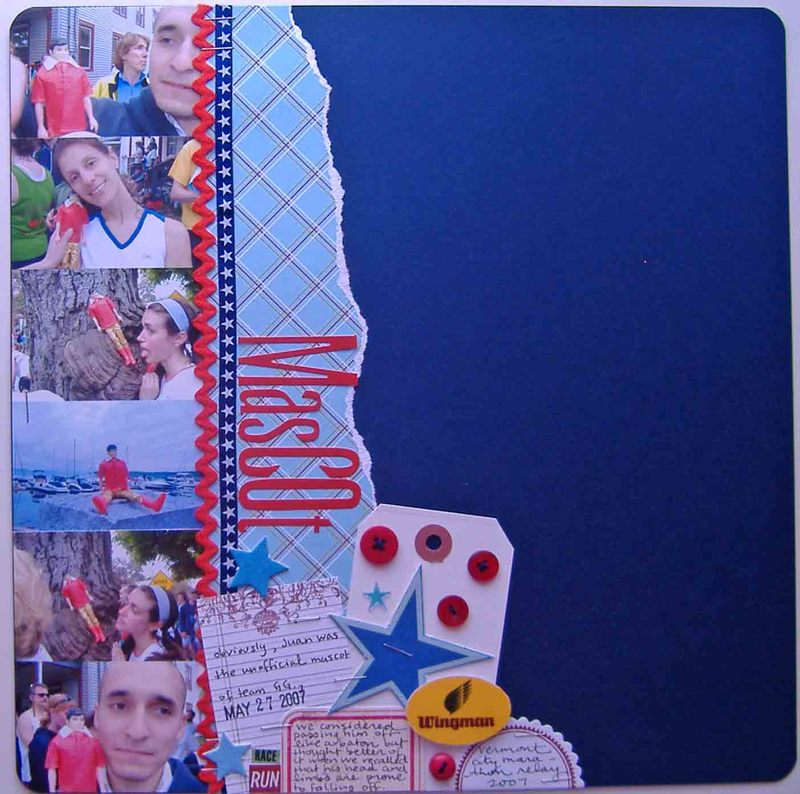 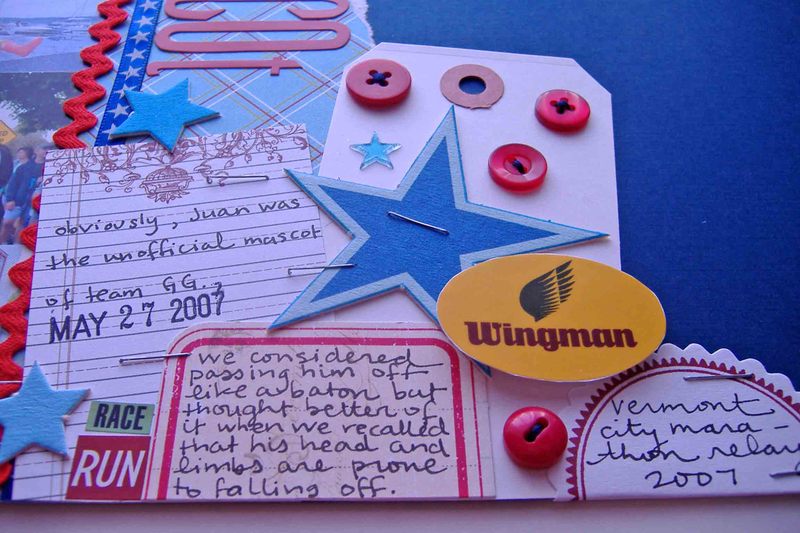 Not exactly a lift but I was totally trying to pay homage to J. Pebbles with this one. It's my way of saying thank you and I love your work too much! P.S. Juan loved Vermont!

was to scrap yourself without make-up and with hair un-did. Here's mine... 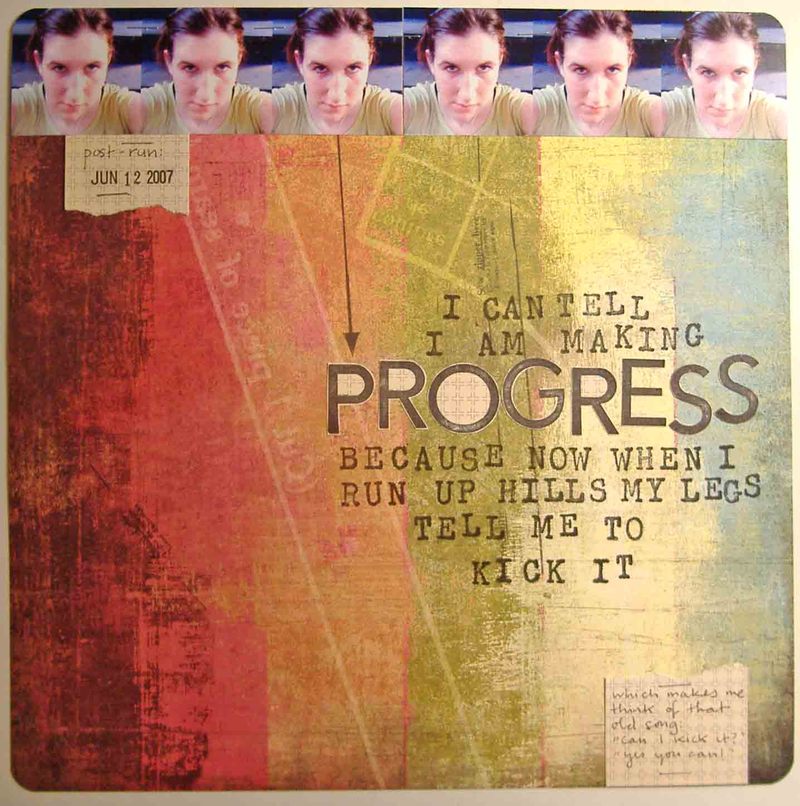 I just got back from running. eeew.
But the running is going well. I'm really loving it. And I think I've found the key to staying motivated (for me). Thinking about races. Because I love them so much and want to do more of them. Half-marathon in October in Portland, ME. I'm really interested in 200 mile relays too. I want to do one next year if I can assemble the required 12-person team.  How much fun would that be? There's one in Vermont and one in New Hampshire. So I'm getting faster. That doesn't mean I'm fast. It just means that I'm not quite as slow as I was when I started. I remember running a five mile race in a little over 40 minutes once, when I was living in Baltimore. Those were the days. I dream of 8-minute miles. But right now I'd settle for 9. On the bright side, I no longer run an 11-minute mile. And I get bursts of energy out of the blue, particularly, as indicated above, when going up hills. And it makes me feel strong.

I got some good news today and I'll share it soon!

The June kit at Cocoa Daisy is awesome. I love the colors and the critters. So cute. It made me want to scrap old photos. 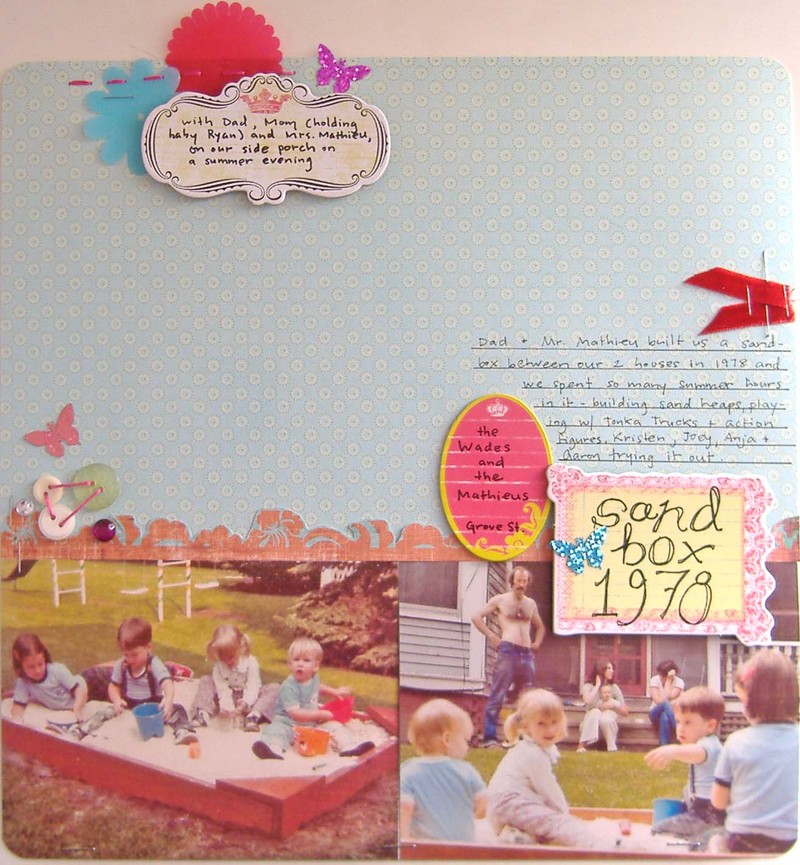 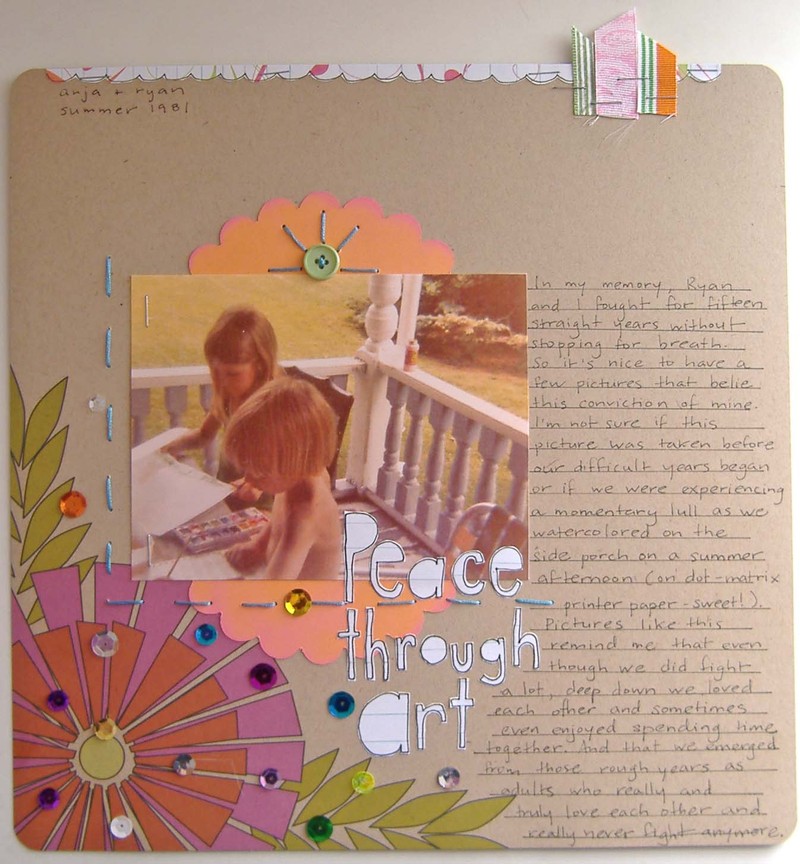 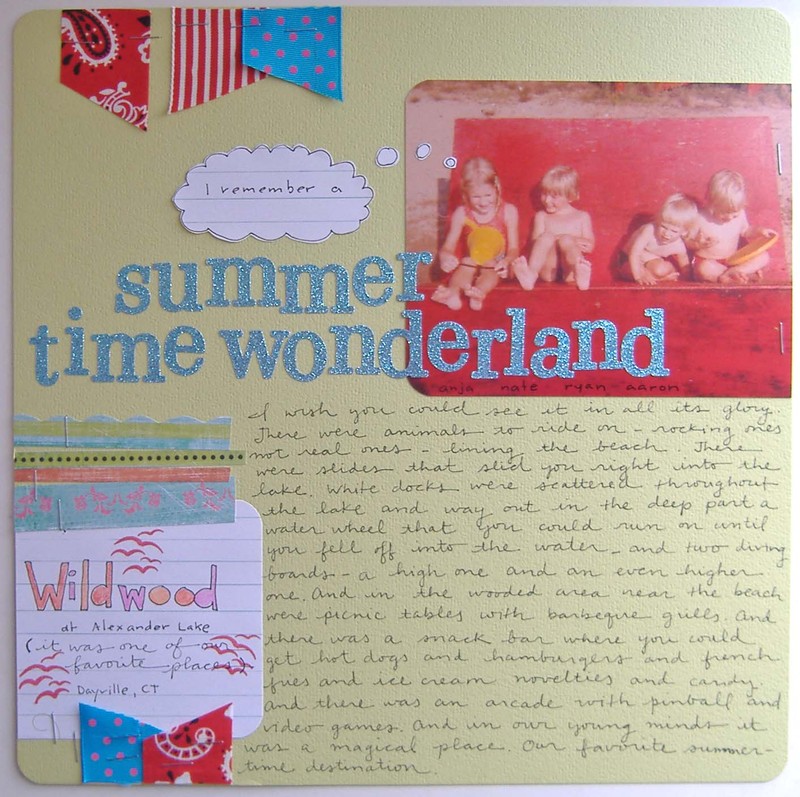 So, as you can see, I took the 70s and 80s pics to town with this kit. There's more over at the site. I also made an I love the 80s mini-album that I kind of like.
I've also been doing some non-kit scrapping lately, which is nice to do from time to time. I get used to working with a kit and when I go to scrap without one I feel a little overwhelmed at all the options I have. But it's good for me.
My favorite is this one...
I love the deer head stamp so much. However, there are only so many situations in which a deer head stamp is an appropriate embellishment. So I thought - Vermont has deer. And there you go. I made the letters out of this ancient wood grain contact paper that I got in like 2000 and buried. I finally dug it out and decided it could look cool and now I'm obsessed with the idea of wood grain and want more but have no idea where to get more. I may need to try home depot. 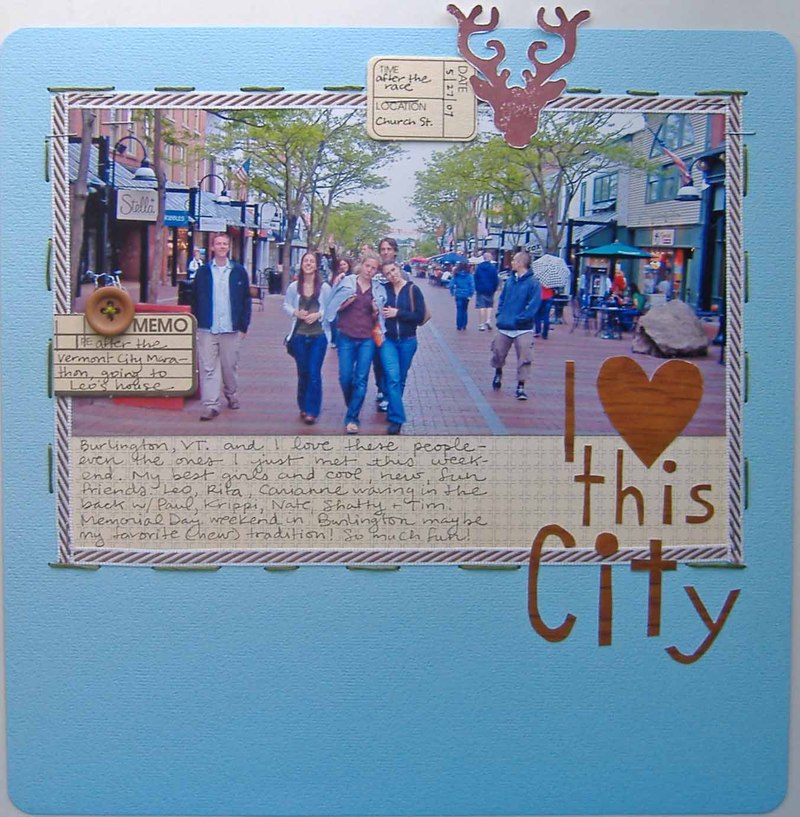 I'm going to have a productive day...

because it's only 9am and I've already run 5 miles. Now I'm going to try to finish catching up on May. Last weekend, I went up to Burlington,VT for the Vermont City marathon. I did it as part of a five person relay team with Paola, Carianne, Rita and Kristen. 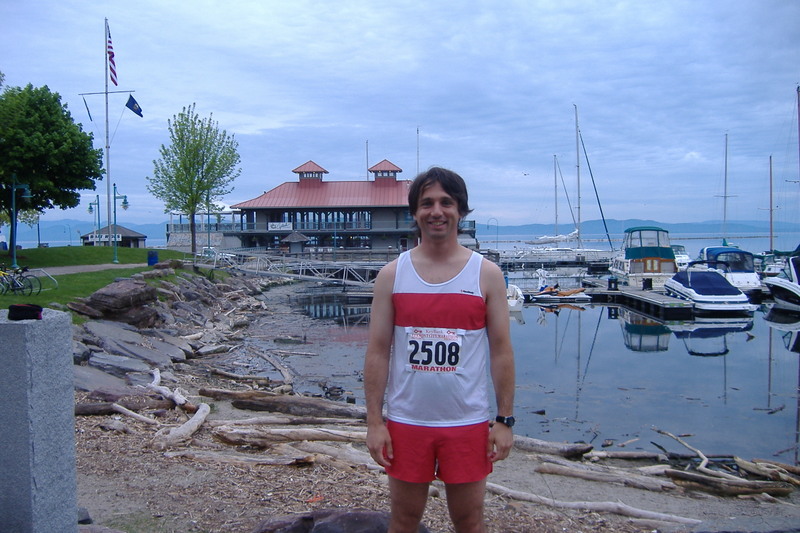 Afterwards, we had some beer. 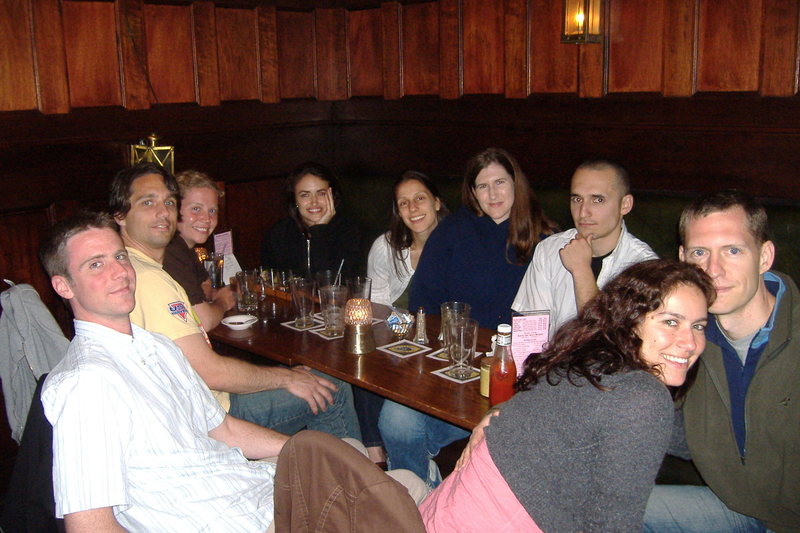 Let's see, that's Leo in the white shirt, and next to him is Nate, then Krippi, Shatty,Rita, me, Tim, Paul and Carianne.
Later we demanded a fire performance, so Tim obliged us. 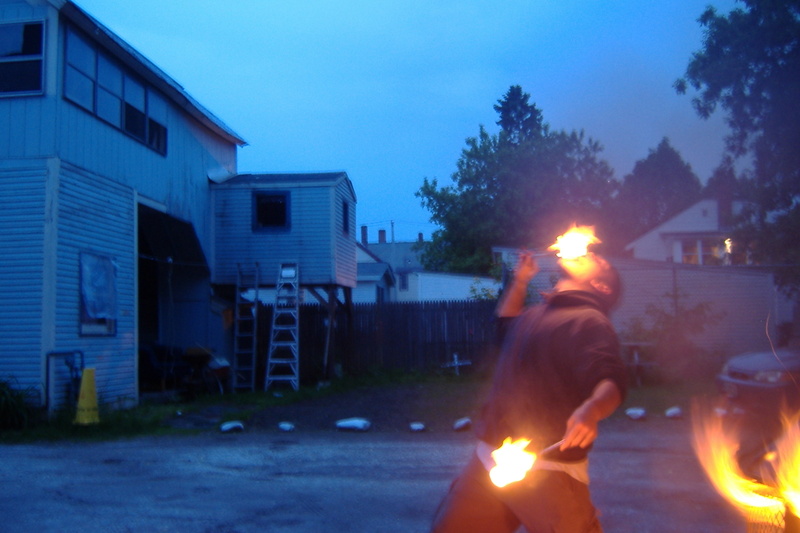 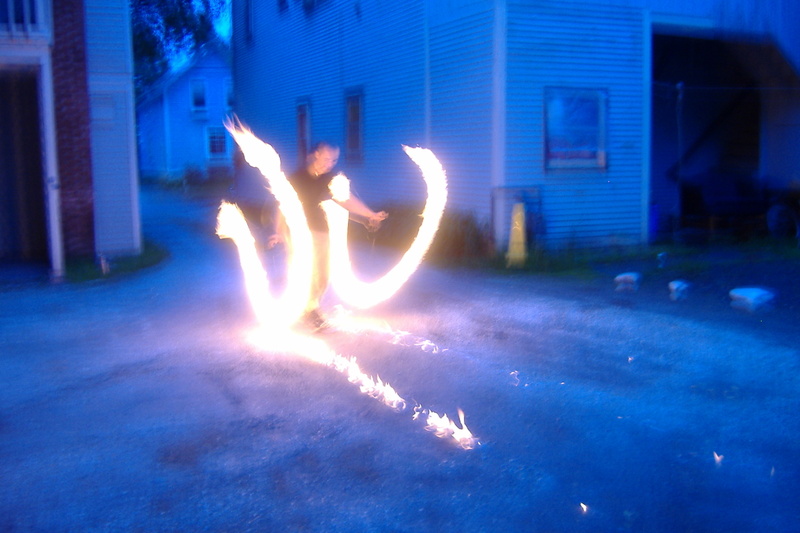 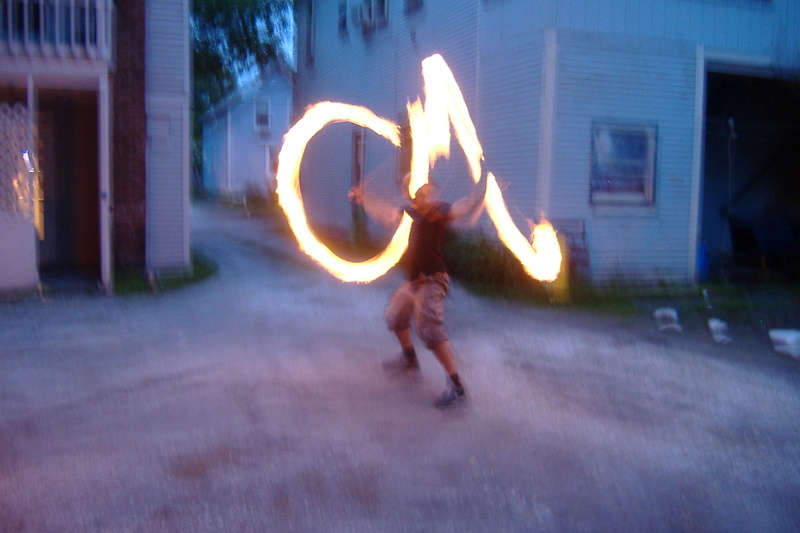 And then we made a pyramid. 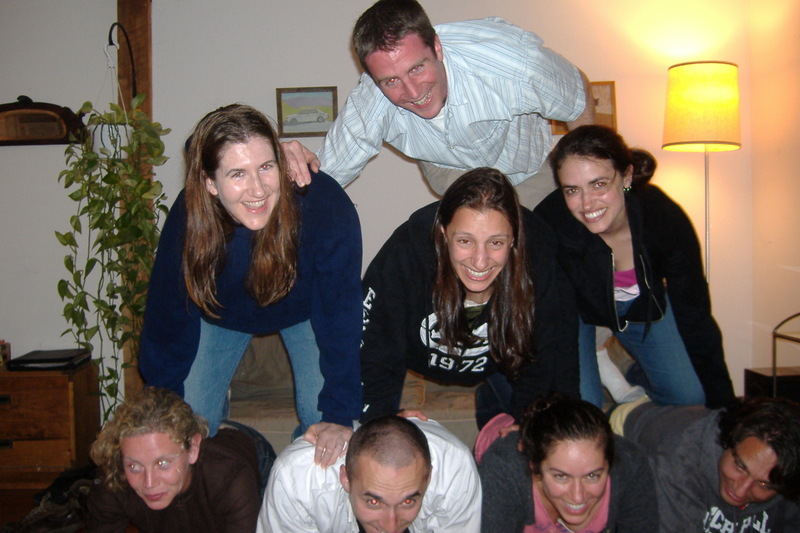 lots of good stuff last month. I know, I suck at updating even when nothing has been going on. But I have an excuse this time. I've been having too much fun to blog. On the 20th we had Aaron and Lottie's wedding celebration. It was everything I had hoped it would be. They booked the Narragansett Towers for it and had a table decorating contest. The location was great, there was good food, lots of dancing, an open bar, and lots of family and friends. 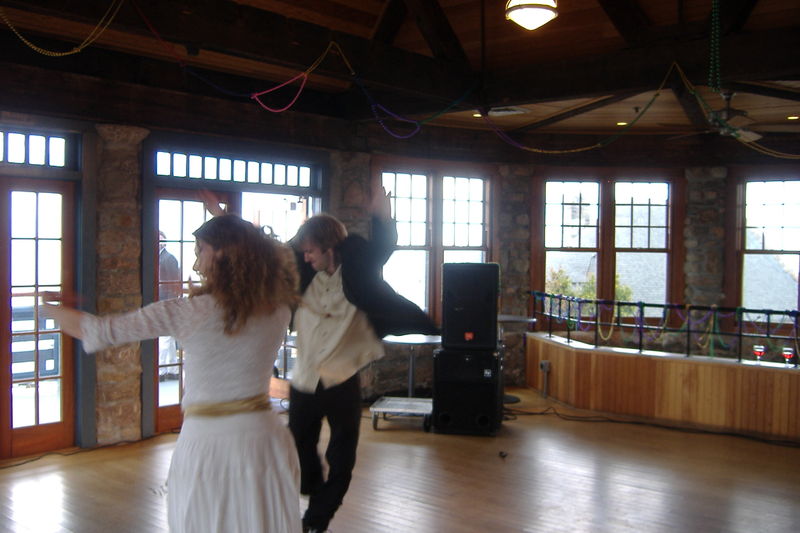 Here is the first dance. Aaron and Lottie take the dance floor and stand in very serious dance position waiting for the music to start. Then "gonna make you sweat" by C + C Music Factory busts out and this happens. I love these guys. Uncle George and Aunt Kathy came from Virginia. They're always so much fun to be with. 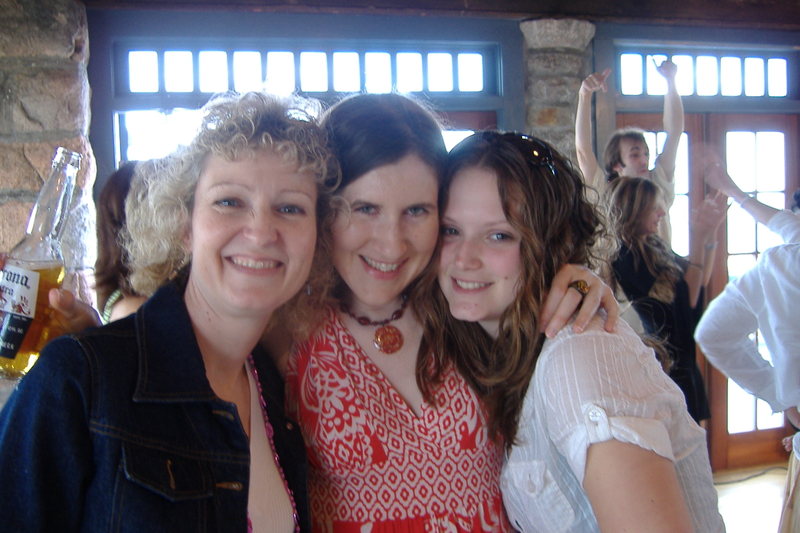 This is my cousin Mary and her daughter Beth from Maine. Would you believe this girl spent the last few years fighting leukemia? She's a tough girl. It was so nice to visit with them. 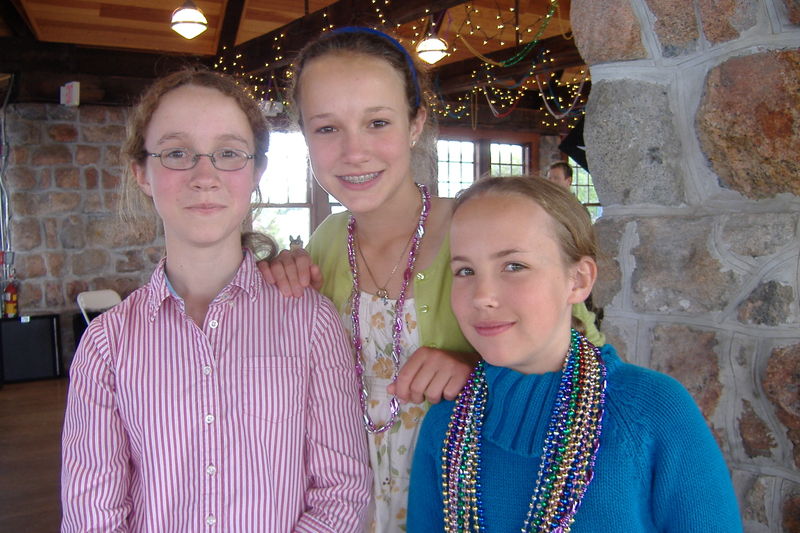 And I can't believe how big these girls are getting. Seems like yesterday they were babies. My cousins Margaret, Kiersten and Liana. 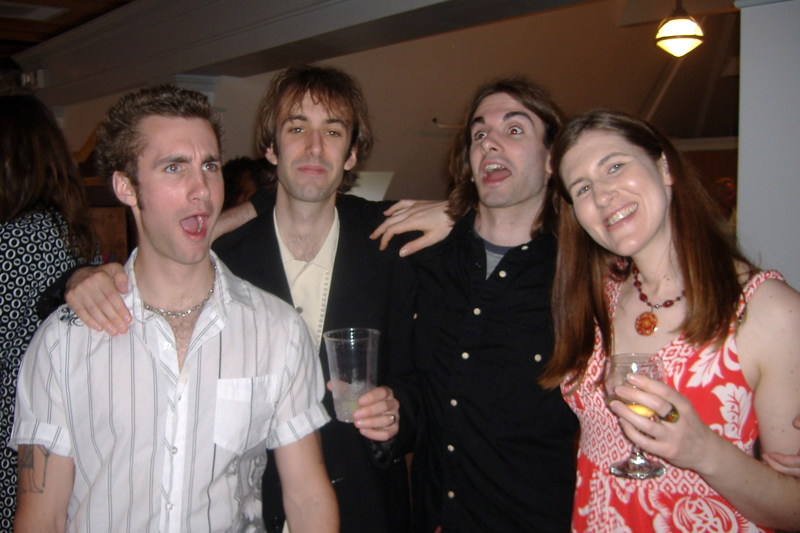 My brothers make me so happy. 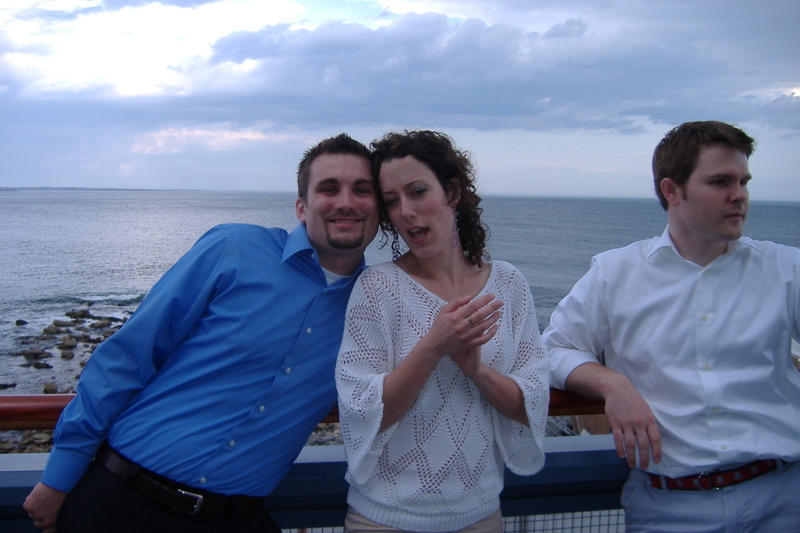 Ryan and Kelley with Adam.  Adam's bringing  preppy back. Check out the belt. 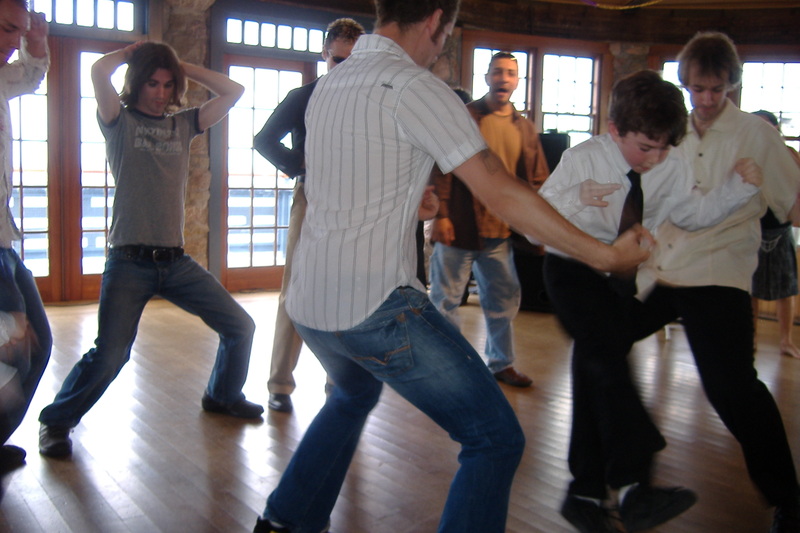 Also, there was a dance contest, and THIS happened. My brothers have raised the pelvic thrust to an art form. They've been honing their skills since childhood. It's spectacular. 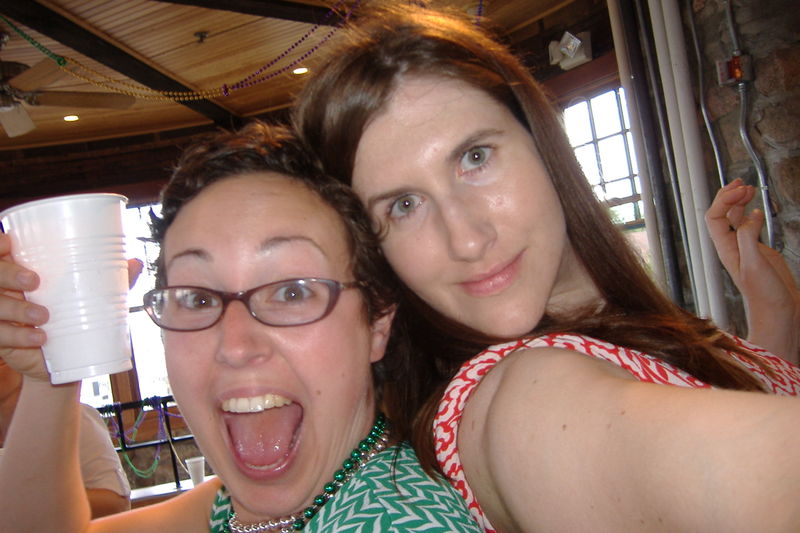 Lindsay Lehmann. She's fabulous. I'm going to call her Double L. She might like that. She's the photographer, and also a guest, which is a tough role to play. Did I mention she's fabulous. 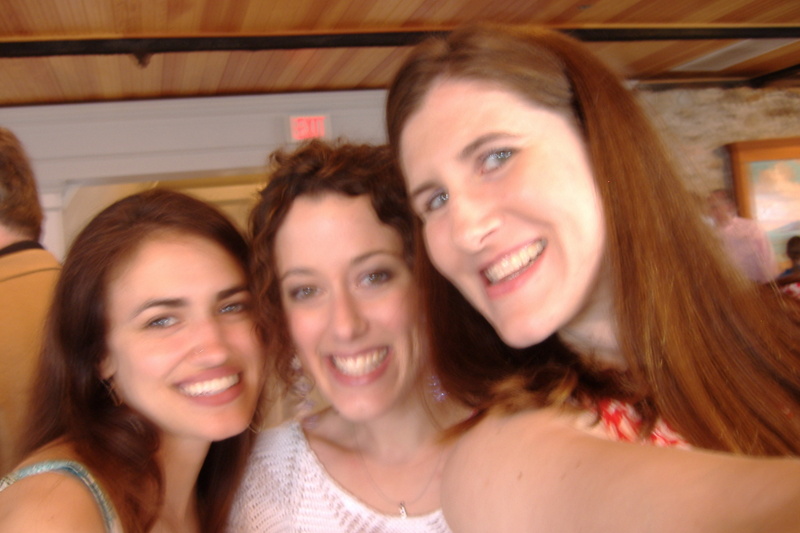 And Shatty came too. She's sort of my date. Maybe someday I'll actually bring a boy to a family event and the misconception certain family members may hold that Shat and I are same-sex life partners will be shattered. But until then, we're OK with it. 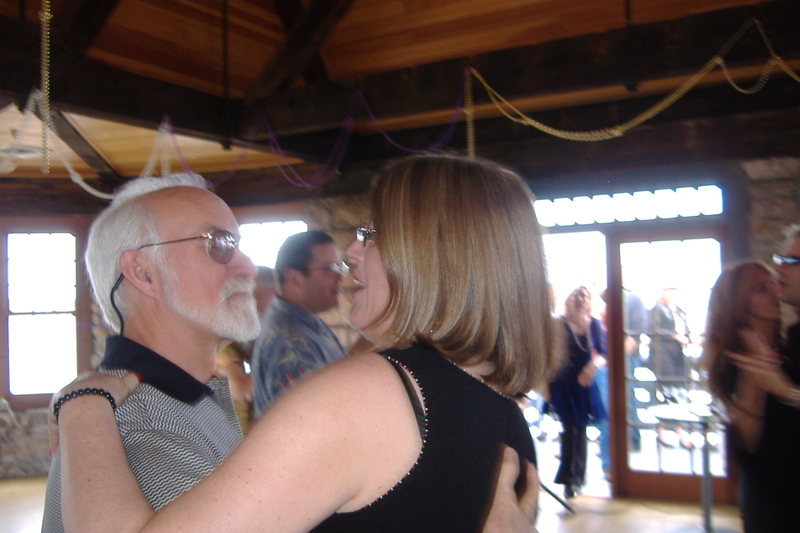 And here's my Mom and Dad. They really are the cutest.
I have so many more pictures but I don't want to push my luck.
So I think I'll put my Vermont pictures in another post.