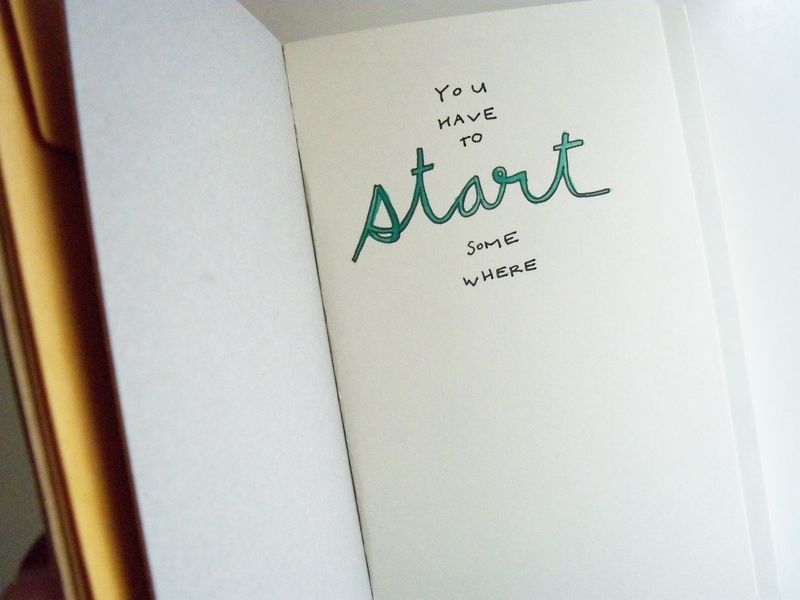 Somewhat serendipitously, I ended up finishing my old art journal yesterday. So I'm starting the new year with a brand new fresh one. I actually started using it yesterday, but I'm counting it as the new year. Lately, I've been working on hand-lettering. I'm using one from Ranger Ink that I really like. Nice heavy pages. 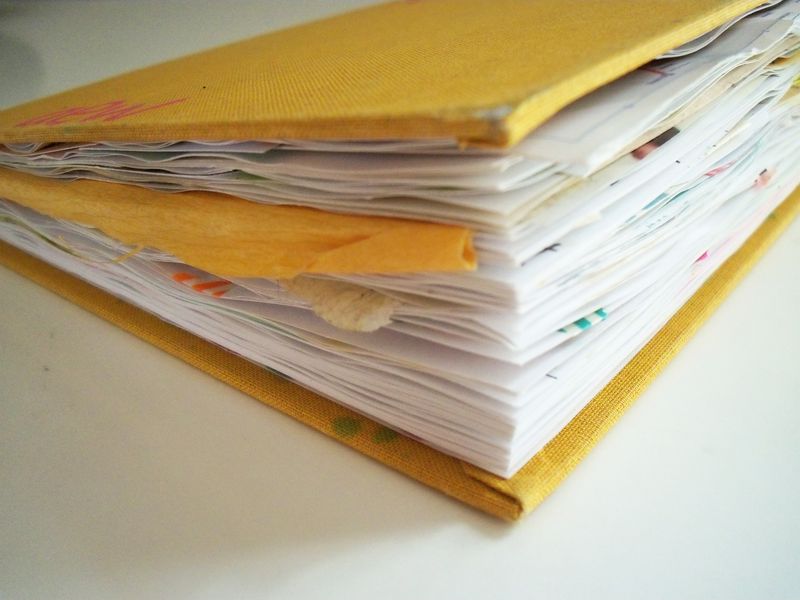 The old one had thinner pages, and they warped a lot from all the paint. It took me four years to fill that one, but I'm trying to make art more of a habit, so hopefully the new one won't last that long. 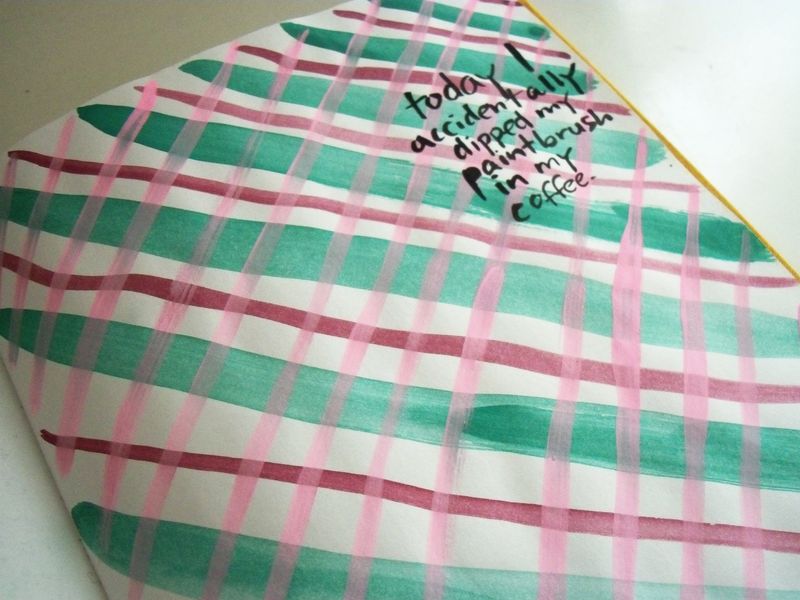 Just playing around with plaid on this page. 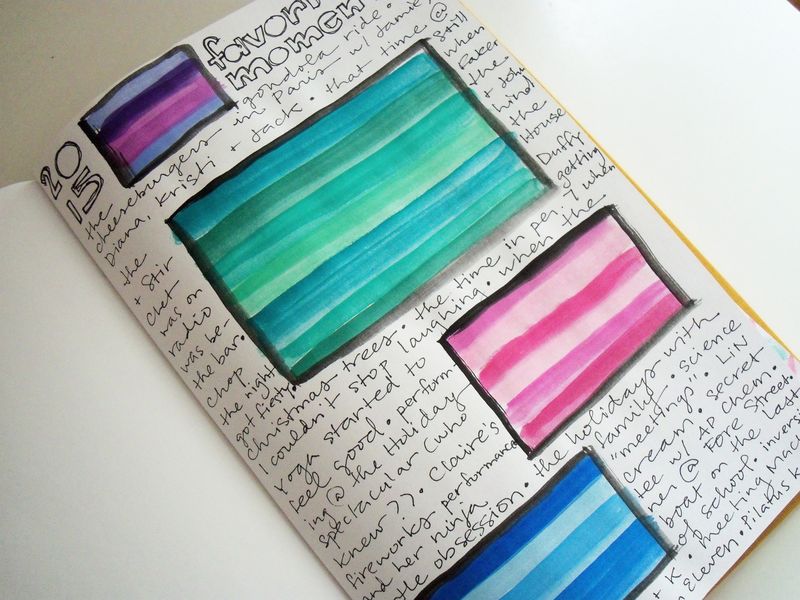 And playing with color here. Then I decided to add a list of my favorite moments of 2015. I'll probably incorporate this list into a scrapbook somehow. My NYE plans involve finishing up my 2015 album and doing some yoga. Glamorous. I think I can do it. I just have November and December left. 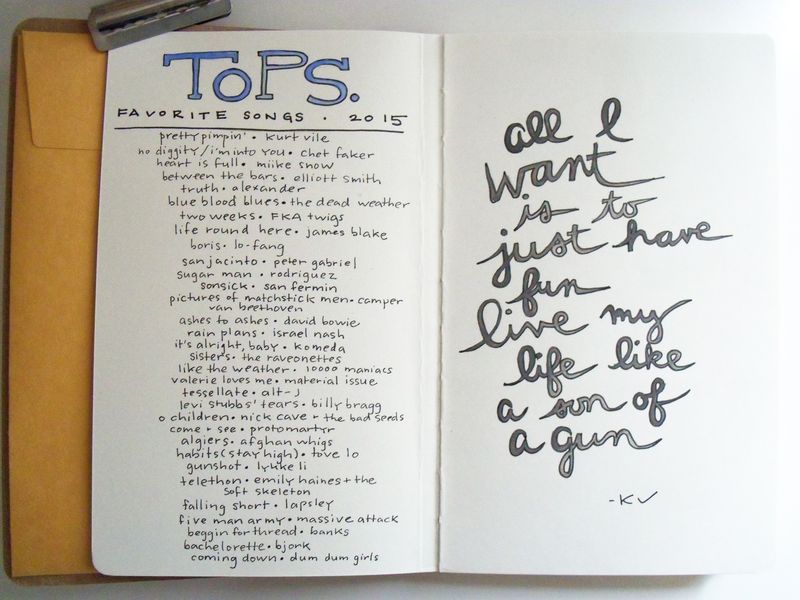 Here's some lettering practice in the new journal. And a list. This journal will probably have lots of lists, just like the old one. I'm such a list nerd. Lyrics from Pretty Pimpin' by Kurt Vile. Listen to it. Seriously. It was my favorite song of the year. Most of those songs probably aren't from 2015. They're just the songs I listened to a lot this year. 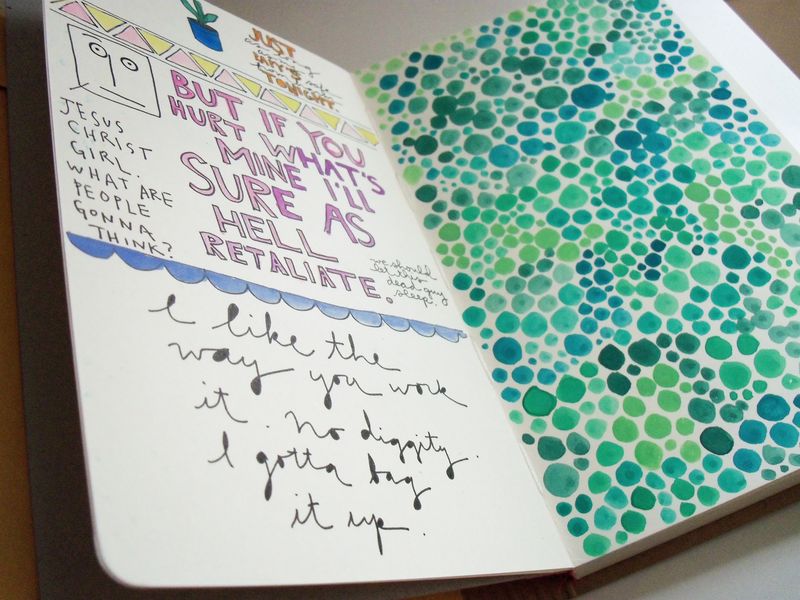 Doodling while listening to music usually results in a journal full of song lyrics. Looks like it was Massive Attack, Chet Faker covering Blackstreet, and Father John Misty.

Thanks for stopping by. Have a great New Year's Eve!

highlights from the beginning of 2014

Now that I've committed to blogging again, I've realized that I haven't posted any layouts from 2014 or 2015. So I'll try to post some highlights. Some of my favorite layouts - the ones I feel turned out well enough to be shared. Here are a few pages from February and March of 2014. (I didn't like any of the January layouts.) 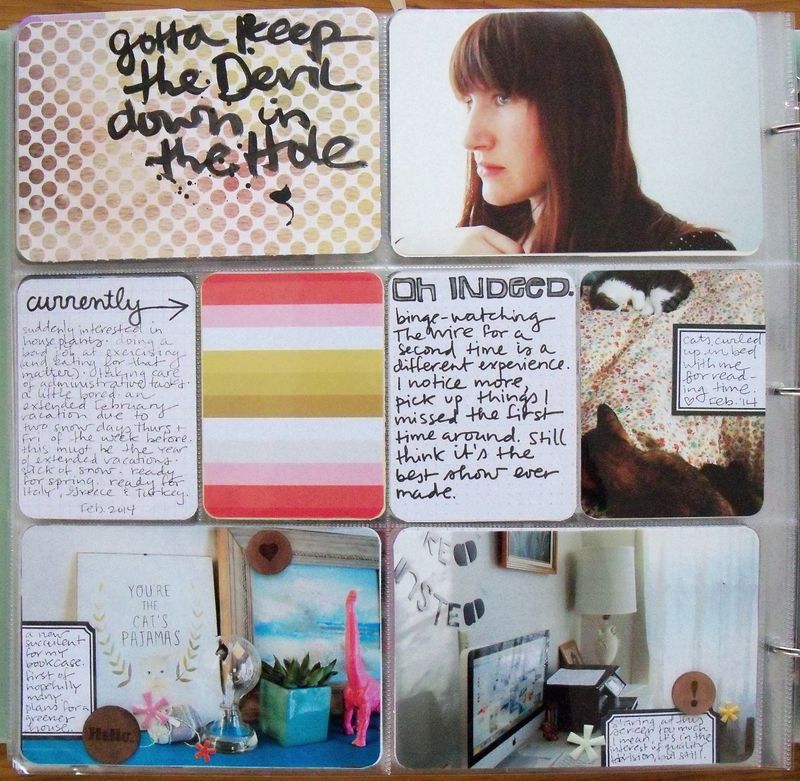 Please pardon my terrible photography. I'm a little rusty at photographing layouts. Will work on that. The hand-painted phrase comes from the theme song for The Wire, which I was watching at the time. 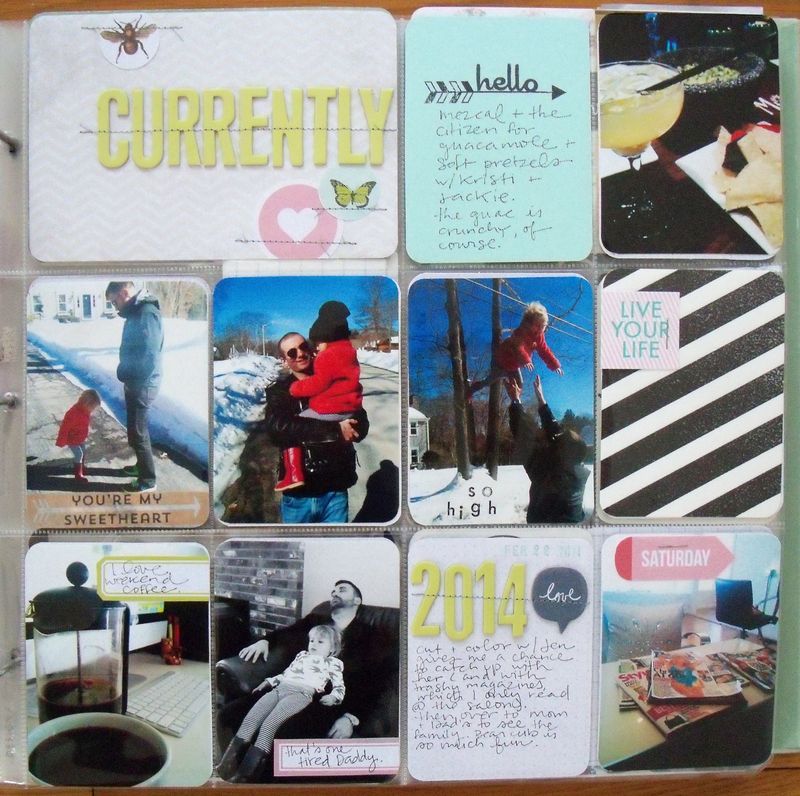 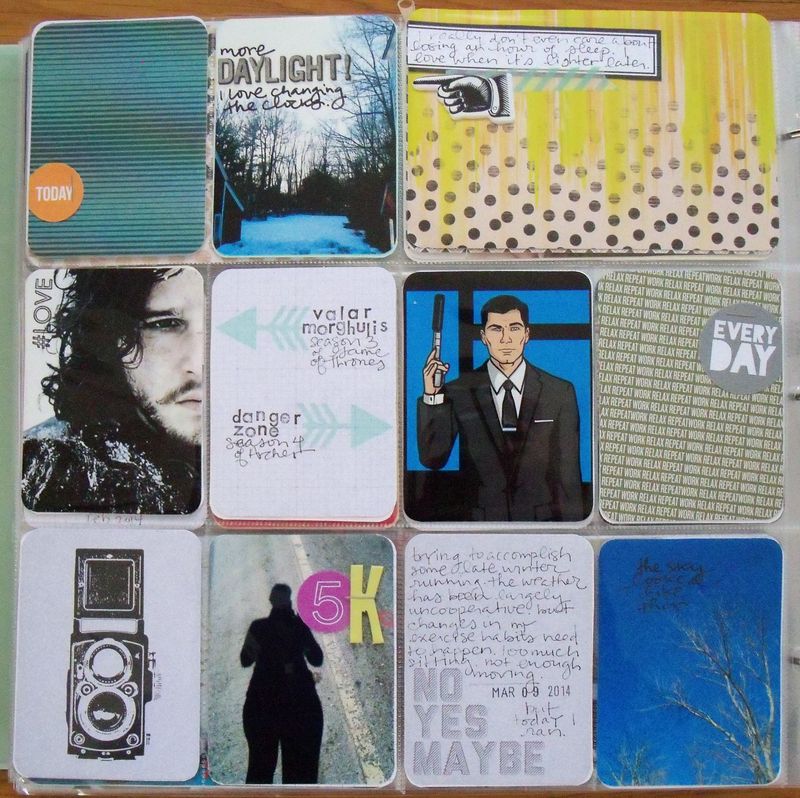 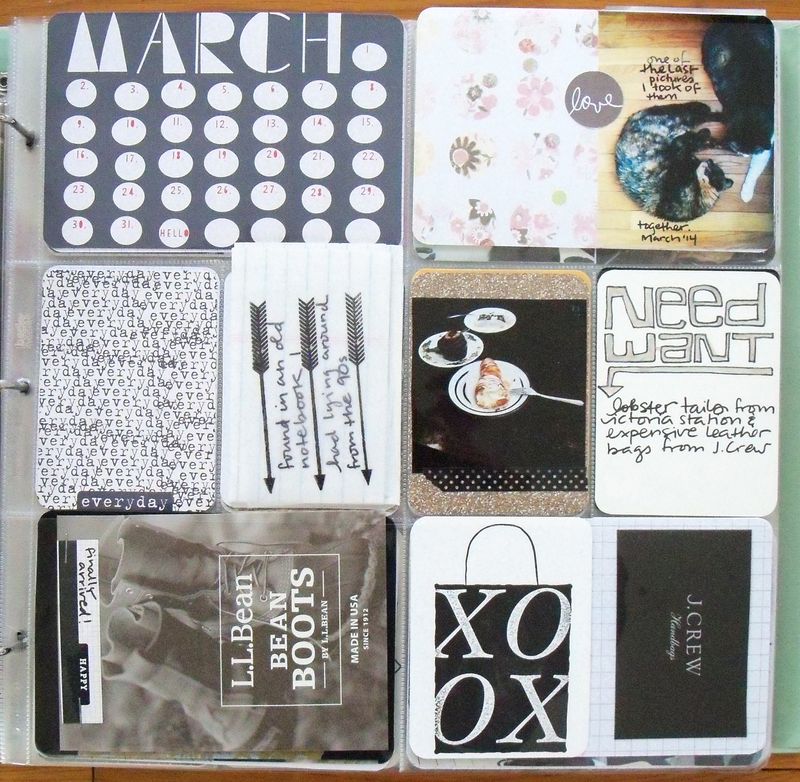 I've always struggled to take enough photos. Usually I just forget. It's something I'm working on. Some of these layouts are light on the photos.

I took a really long break again. I still scrapbook, mostly in pocket pages, but somehow I got out of the blogging habit. School is always busy, and my focus is there. And then school ended for the year, but I hadn't posted in so long that it seemed daunting to try to start again. And now it's even more so, but I have the New Year momentum in my favor, so let's give it a try. 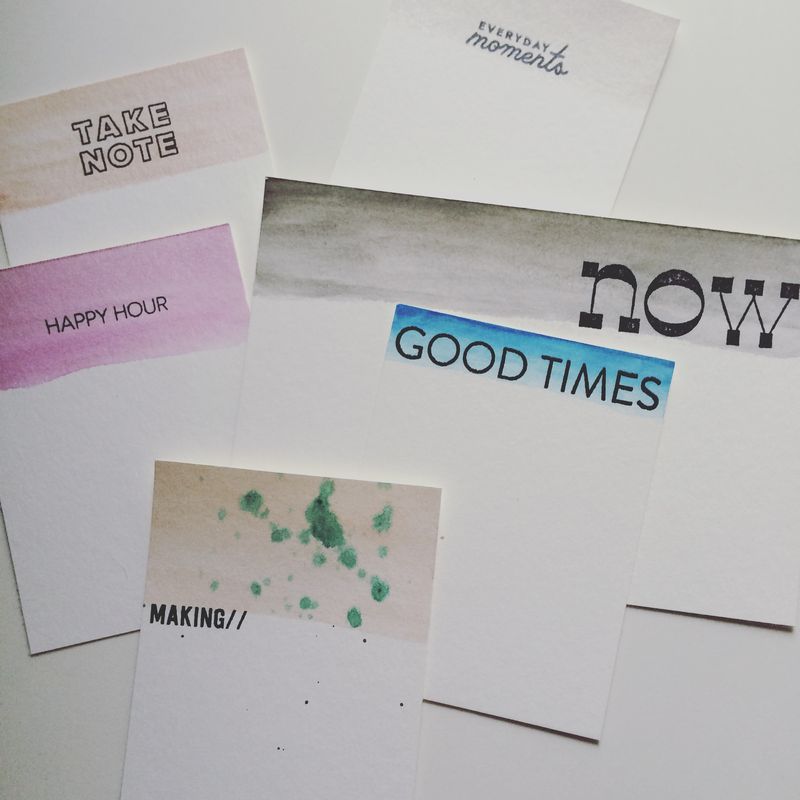 I'll be working on photographing layouts this week. I have a year's worth. For now, here's a quick one of some cards I made for pocket pages. I make a lot of my own cards. I go back to this a lot - just some watercolor and stamping. The stamps are mostly from Studio Calico.

I'll be back soon (I think) with more pictures.

<a href="http://www.bloglovin.com/blog/1942480/?claim=zyxvftqgnyz">Follow my blog with Bloglovin</a>